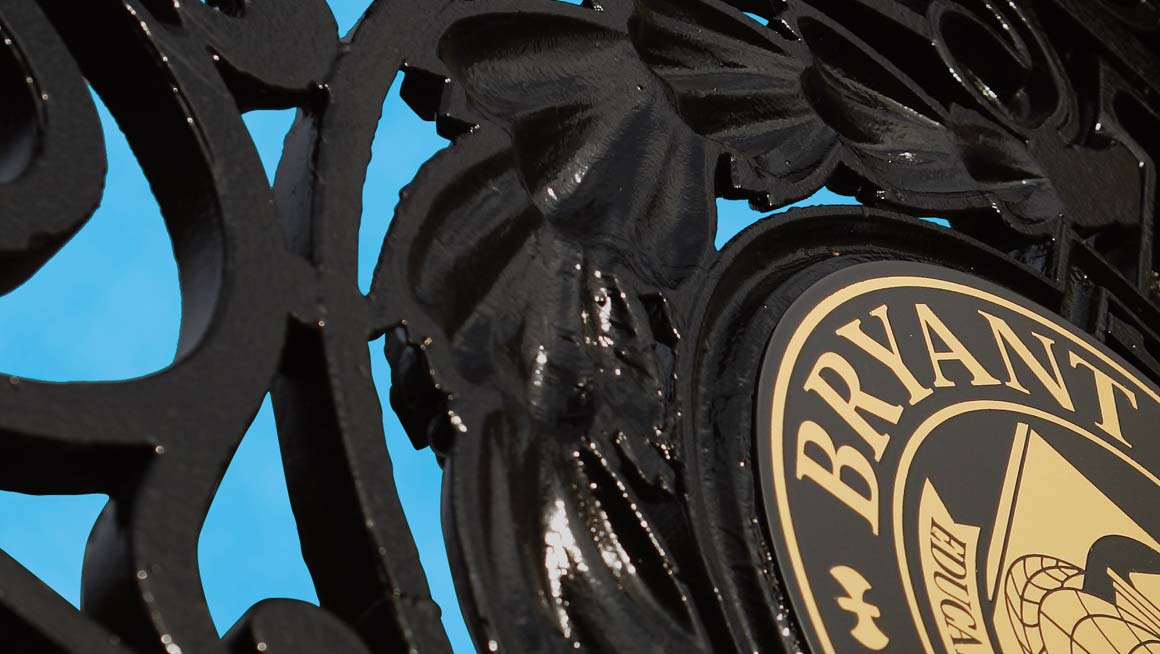 Since 2009, the Champions for Philanthropy awards have honored alumni, parents, and friends of the University whose generosity allows Bryant to fulfill its mission to provide an education that challenges, inspires, and prepares students for success.

At the gala dinner that has become a signature event during Bryant University's Homecoming and Reunion Weekend, five individuals were recognized as Champions for Philanthropy. This year's honorees include two alumni couples and a friend with deep personal and corporate ties to Bryant.

Margaret (Giroux) Janikies '57 and Nicholas Janikies '57, '86H received the Outstanding Alumni Award , one of the highest honors Bryant can bestow. Nicholas grew a single Burger King franchise in Cranston, R.I., into the Jan Companies, a hospitality empire encompassing over 100 restaurants and country clubs in six states and one of Rhode Island's largest private businesses. Margaret was always by his side – a partner in life and business. At his passing in May, Nick left a legacy of service, generosity, and loyalty that continues to inspire the Bryant community.

In addition to Nicholas' visits to campus to mentor and guide students and alumni, he and Margaret believed in giving back through philanthropy. To celebrate their 25th Class Reunion, they issued a $100,000 challenge grant to their classmates. Over the years, they have made gifts totaling more than $1 million. Janikies Theatre is a daily reminder of the family's longstanding engagement with the University and stands as a tribute to Nicholas' parents, William and Amelia Janikies.

Ruth (Hettinger) DeLomba '60 and Paul DeLomba '60 were honored with the Outstanding Consecutive Giving Society Award. The DeLombas' lifelong appreciation and devotion to Bryant is demonstrated by a stellar record of continuous giving that has spanned more than five decades. Their generosity has included annual gifts to the Bryant Fund, as well as special gifts to the Campaign for Bryant in 2000 and the current campaign, Expanding the World of Opportunity – the Campaign for Bryant's Bold Future.

They also have established an endowed scholarship that bears their names. Paul's lifelong employer, PwC, has significantly increased the impact of his gifts through its corporate matching gifts program.

The DeLombas are among an elite group of Bryant alumni whose record of successive gifts spans more than 35 years. They are charter members of Bryant's new Consecutive Giving Society, founded to honor those who demonstrate that Bryant University is a philanthropic priority through recurring gifts.

Carolyn Rafaelian – Alex and Ani were honored with the Outstanding Friend of the University Award. The Founder, CEO, and Chief Creative Officer of Alex and Ani, a global lifestyle company with revenues of over $500 million, Rafaelian grew up understanding the value of a Bryant education. Her father, the late Ralph Rafaelian '55, operated Cinerama, one of Rhode Island's most successful jewelry manufacturing operations when that industry was at peak productivity in the region.

During a special ceremony held in Florida in January, Siro '57 and Roberta DeGasperis were honored as the University's 1863 Society Champions for Philanthropy in recognition of decades of exemplary leadership.

President Ronald K. Machtley thanked Siro and Roberta for their long history of significant contributions to Bryant, noting that "Our success as an institution depends so much on our alumni and friends who give something of themselves in order to help new generations of students achieve great things."

The couple has demonstrated an exemplary commitment to developing the whole Bryant student through their generosity to develop innovative leaders with character.

Through the DeGasperis Family Endowed Scholarship, they give students not only the opportunity of a Bryant education but also the intellectual freedom and confidence that come from a reduced student debt burden.

In addition to these significant and visionary commitments, Siro and Roberta have made gifts to Bryant for 25 consecutive years. They are members of the Bryant Leadership Council, and through a bequest have also joined our 1863 Society. Siro is a recipient of the Nelson Gulski Alumni Service Award and has served as a member of the National Council on Philanthropy.