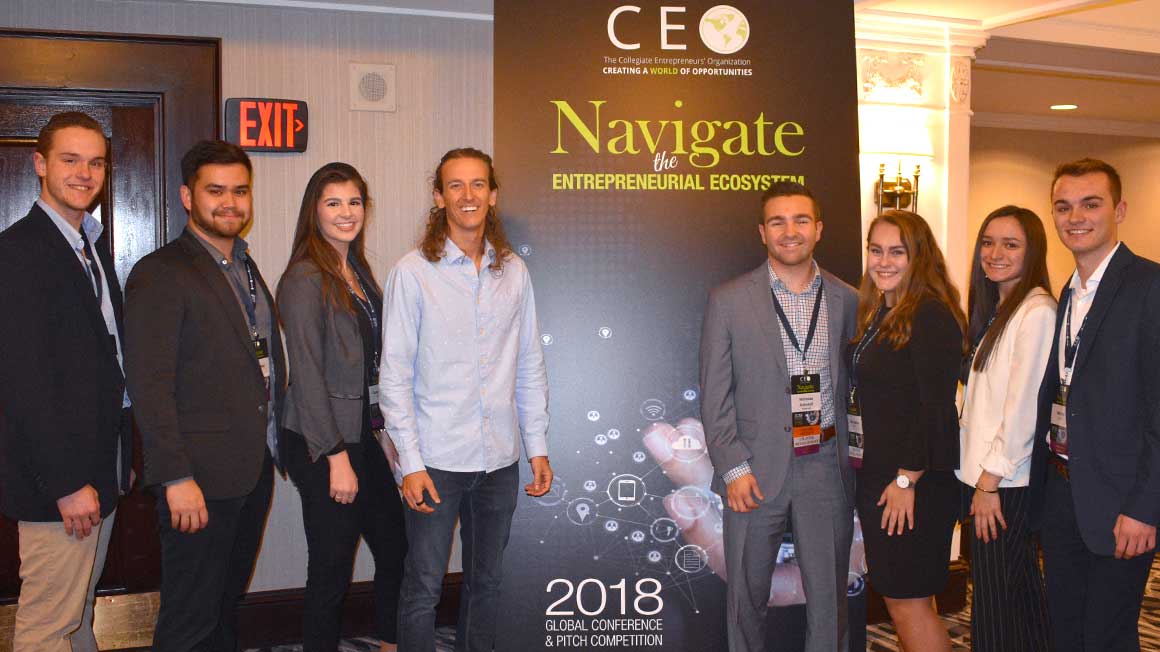 Bryant's chapter of the Collegiate Entrepreneurs’ Organization recently traveled to the 2018 CEO Global Conference and Pitch Competition where they learned from leaders in their field, including Matt Wilson '06, Chief Executive Officer and co-founder of eco-tourism company Under30Experiences.
Bryant CEO group makes its mark at global conference
Dec 04, 2018
Alumni

At the 2018 Collegiate Entrepreneurs’ Organization (CEO) Global Conference and Pitch Competition, an event that attracted more than 1,000 students from more than 250 chapters around the world, Bryant University’s students and alumni made their mark as leaders and as innovators, and learned lessons that will help them make their next big leap forward.

“The conference was an amazing opportunity for students to be surrounded by so many like-minded and driven individuals who are constantly trying to push themselves to be the best they can - and help you be the best you can be,” said Nick Anketell ’19, President of Bryant CEO, who led a group from Bryant’s chapter of the organization to the Kansas City, MO, conference.

Sharing success
In addition to gaining inspiration and advice from the assemblage, the Bryant CEO group shared what they’d learned. Anketell presented on the organization's leadership model, Isabel Hamilton '20 discussed how the group works to build and retain its membership, and Savanna Templeton ’21, VP of Events, highlighted Bryant CEO's pitch competitions, such as the recent Global Sustainability Pitch Competition where first-year students develop business plans to address major world issues.

"It's just unbelievable to be surrounded by all of those ideas and all of that passion, from both the students and the speakers. Because of that I was inspired to go forward and start a business of my own."

Bryant CEO was recognized for excellence in a number of fields, winning first place awards for “Outstanding Marketing and Social Media” and “Best Cross Campus Innovation and Marketing.” The chapter was also selected as one of four finalists for the Global Chapter of the Year Award, an honor it has won five times previously and been nominated for 11 times.

“It was awesome to be able to share what we’ve learned with other people from other schools, and to see all of our hard work pay off,” said Hamilton.

During the three-day conference, the Bryant group networked with and listened to presentations from entrepreneurs, subject matter experts, motivational speakers, and fellow students. The conference offered sessions on a range of subjects, from raising capital for a project to leveraging a business plan to leadership development to social entrepreneurship.

Hamilton, Bryant CEO’s Vice President of Membership, was inspired by the wide range of presenters, including a keynote speech by LaVona Roth, President of Ignite Your S.H.I.N.E., on helping others find their path and a presentation by an artist on bringing together other artists in her community. “It was really interesting seeing all the different sides of entrepreneurship,” said Hamilton. “It proves that you don’t need to be a CEO of some giant corporation - it’s about finding your passion and figuring out how you can help change the world.”

“I’ve gone to this conference three times and every single year I get more inspired by it,” agreed Anketell. “It's just unbelievable to be surrounded by all of those ideas and all of that passion, from both the students and the speakers. Because of that I was inspired to go forward and start a business of my own.”

Continuing disruption
Bryant was well-represented at the conference beyond the contingent of current students. Former Bryant CEO Presidents Ken Roberts ’12, a partner at NoHatDigital and Director of Due Diligence at Media Block Corp, and Harris Roberts ’14, Digital Investment Manager, Wired Investors, presented on Building a Passive Digital Venture [In Your Dorm Room]. Bryant CEO founder Matt Wilson ’06, now the Chief Executive Officer and co-founder of eco-tourism company Under30Experiences, delivered one of the conference’s keynote addresses.

Before founding Bryant CEO, Wilson remembered asking himself, “What would a good entrepreneur do?” His answer was simple: “Let’s innovate. Let’s make some change. Let’s disrupt.

“I think the most important thing is to look at your subject matter and innovate,” he noted. “You don’t have to drop out of school to be an entrepreneur, you just have to think entrepreneurially.”

The conference helped confirm for the students that Bryant University was a perfect place to do that. “All of the alumni talked about their education at Bryant and how the mix of business and liberal arts they learned helped them to go forward with their careers. It helped them identify different problems they wanted to solve and figure out how to start their own businesses to solve them,” said Anketell.