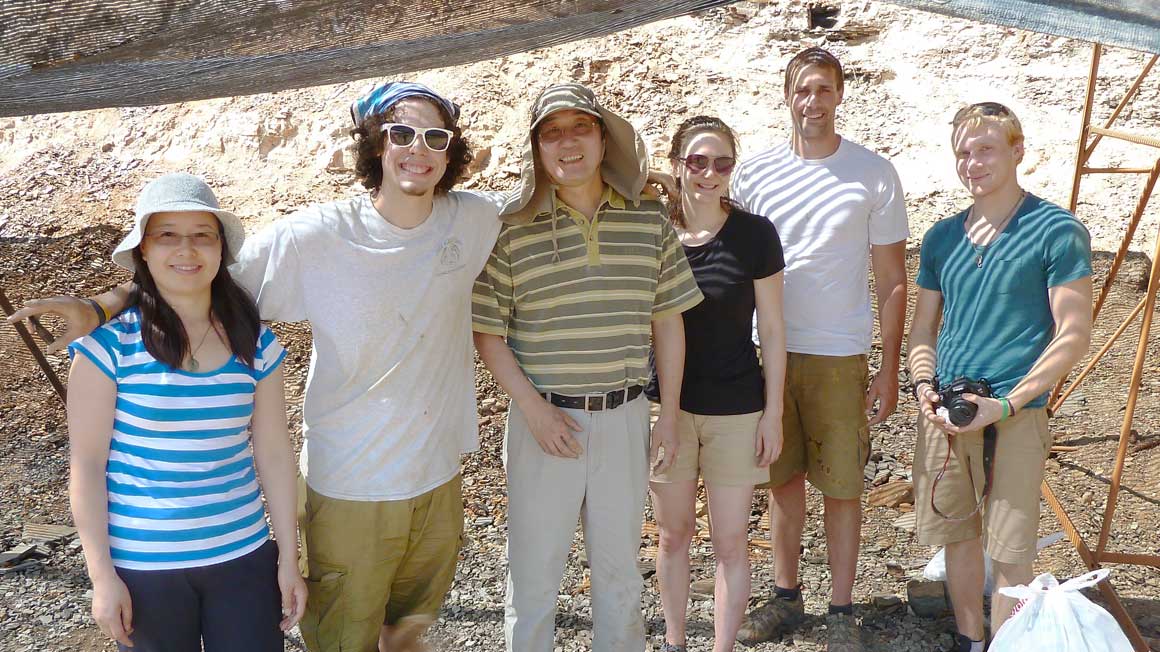 SMITHFIELD, RI – Science Professors Hong Yang and Qin Leng and an international team of researchers from the Chinese Academy of Sciences and the University of Hong Kong collaborated to report on the world's longest (800 thousand years) land surface temperature record. The discovery was made by reconstructing soil bacterial and archaeal cell membrane lipids preserved in well-dated sedimentary sequences at the center of the Chinese Loess Plateau. This breakthrough research has implications for mitigating future ecological impacts including warming trends.

This breakthrough research has implications for mitigating future ecological impacts including warming trends.

The article, “800-kyr land temperature variations modulated by vegetation changes on Chinese Loess Plateau," was accepted by Nature Communications of the Nature Publishing Group, one of the world’s most prestigious scientific publishers. Nature Communications publishes high-quality and peer-reviewed research from all areas of the natural sciences in an open access format. The high-impact and widely influential publication has an acceptance rate of only 7.7 percent.

Scientists found a previously-unrecognized early and prolonged warming pattern at the onset of the past seven deglaciations. The research revealed that surface vegetation might have played a previously unrecognized important role in regulating land surface temperatures, and thus will be critical in mitigating future land temperature changes.

The research collaboration started nearly two decades ago when Professor Yang, who is a corresponding author of this publication, took a group of Bryant students to visit the Chinese Loess Plateau in his “Environment Study in China” course. This report is a part of the on-going research theme on climate change conducted at Bryant’s Laboratory for Terrestrial Environments where Bryant faculty, students, alumni, and international visitors collaborate on research. The National Science Foundation supports the current climate change research at Bryant’s laboratory.

Key findings and conclusions of the report:

- The longest (800 thousand years) land surface temperature (LST) reconstructions based on distributions of soil lipids from ancient bacteria and archaea preserved in Chinese Loess Plateau (CLP), one of the well-established climate archives (along with ice cores and ocean sediments).

- New climate change pattern recorded in land surface temperatures for the past seven deglaciations. The patterns are correlated but different from the marine record. This is attributed to the vegetation coverage under the influence of Eastern Asian Monsoon.

- Surface vegetation variations have played a substantial role in regulating near-surface land temperatures in the past and will likely to be a key factor in the future. According to the article, the “results confirm that LST changes in semi-humid and semi-arid regions with little vegetation cover are more sensitive to global warming and also reinforce one of the obvious, but less appreciated, beliefs that improving vegetation coverage on the CLP would help mitigate ecological impacts under the projected warming trend by reducing near-surface temperatures.”

Professors Yang and Leng are available for interview.

Hong Yang, Ph.D., recognized as a U.S.-China Public Intellectual Fellow by the National Committee on U.S.-China Relations, is a distinguished professor and research scientist who has been a member of the Bryant community since 1998. He is the founding director of Bryant University’s U.S.-China Institute and has directed the Confucius Institute at Bryant since 2006. Yang established the University's Environmental Studies in China program in his first year.

Yang has held visiting appointments at Brown University and at Yale, and is an honorary professor at the Chinese Academy of Sciences and three Chinese universities. He has received numerous scientific awards, honors and recognitions, including the prestigious Alfred P. Sloan Award in Molecular Biology and Evolution. He is the author of more than 70 scientific articles and a co-editor of three recent books on geobiology, ecology, and conservation of Chinese Dawn Redwoods.

Yang received his bachelor's and master's degrees from the China University of Geosciences in Wuhan (BA) and in Beijing (MS), and his Ph.D. from the University of Idaho. He was a postdoctoral fellow at the University of Michigan at Ann Arbor before joining the Bryant faculty. Yang's research focuses on molecular investigations of modern and ancient organisms, global climate changes, and anthropogenic alterations of physical environments.

Qin Leng, Ph.D., recipient of China’s Outstanding Scientist Award of Jiangsu Province, is a distinguished professor and scientist who has been a member of the Bryant community since 2009. She is a co-organizer of Research and Engagement Day, a symposium that celebrates the research, creativity, and innovative academic accomplishments of the entire Bryant community.

Leng has held visiting appointments at both the University of Idaho and the Swedish Museum of Natural History. She has received numerous awards, honors, and fellowships, including a Travel Grant and Award from the Chunhui Program of the Ministry of Education in China. Her research and collaborations have resulted in more than 50 scientific articles and four books.