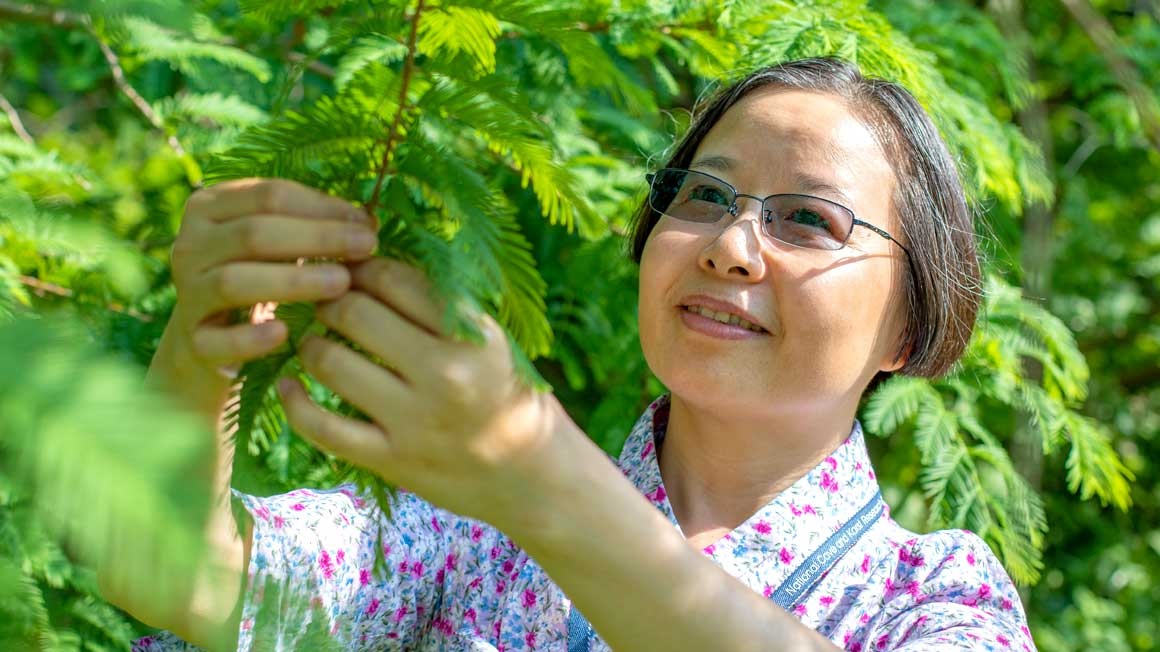 Bryant Professor Qin Leng, Ph.D. studies the Metasequoia trees planted on Bryant’s campus in 2006 as a part of the Second International Metasequoia Conference held at Bryant. The five dawn redwood trees have been used as a living laboratory by students and faculty for courses, field trips, and research. .
Bryant scientists, students, and collaborators around the world study the impact of climate change
Dec 04, 2018
Faculty Research Science and Technology

By Kirsten Hokeness, Ph.D., Chair, Department of Science and Technology

On November 23, 2018 the Fourth National Climate Assessment report was released. A day typically marked for shopping the holiday sales was also marked by the dire results of the extensive climate report, giving Black Friday a new meaning. The multiple impacts of climate change on the United States were described in the 1,600 page report compiled by more than 300 experts guided by the 60-member Congressional Federal Advisory Committee. The report describes how climate change will cause economic losses estimated to be in the hundreds of millions of dollars. It highlights key environmental calamities including increased extreme weather events, oceanic warming, and loss of biodiversity and rising sea levels. The report also indicates the deadly impact of the change in climate as human health will be affected by increased vector-borne diseases and respiratory disorders over the coming decades.

Scientists from a wide variety of disciplines at Bryant University are investigating the effects of climate change, monitoring the progress of change, and looking at ways to measure alterations to the ecosystems in response to changes in the climate. Here are some of the ways Bryant faculty and students are having an impact.

A new way of monitoring rates of climate change

One of the largest hurdles in climate changes studies has been to find reliable indicators or proxies for monitoring rates of change. CO2 has been one of the primary proxies, or measures, used to date to study ancient climates and has been used as an indicator for future predictions.  Estimates on CO2 levels go back about 400 million years, but results have often been clouded by questions of accuracy and internal consistency of CO2 as a proxy. Professor Brian Blais worked alongside Bryant alumnus Caitlyn Witkowski (’11 BA, ’14 MS) and her team at Royal Netherlands Institute for Sea Research and Utrecht University to develop a new proxy of ancient CO2 levels, using the organic molecule phytane, a metabolic waste product of chlorophyll. This new organic proxy provides the most continuous record of CO2 to date and extends the length of historical record to 500 million years. Their paper was just published this week (Sci. Adv. 2018, DOI: 10.1126/sciadv.aat4556) and was presented at the Golschmidt 2018 Conference in Boston in August. Goldschmidt is the foremost annual, international conference on geochemistry and related subjects, organized by the Geochemical Society and the European Association of Geochemistry. The paper is highly acclaimed by the scientific community at large and is a ground-breaking contribution to advances in climate modeling that will help scientists better predict the future effects of atmospheric CO2 and climate change.

Measuring the impact on ecosystems

Professor Chris Reid, Ph.D., is working on identifying ways to monitor coastal health by looking at lipid profiles of dinoflagellates, which are one-celled organisms such as marine plankton.  His team, which included undergraduate student Kai-Lou Yue (’20), and colleagues at the Graduate School of Oceanography at URI presented their work at The 2018 Gordon Research Conference (GRC) on Marine Microbes held in Tuscany, Italy in July. “Environmental factors, many anthropogenic (human-influenced) in origin, can have a significant impact on primary production of (phytoplankton)[CC1]  in marine environments. These changes in phytoplankton productivity can have significant consequences on marine food webs. Changes in nutrient flux through the marine food web can have implications to marine health and commercial fisheries,” Reid says. His work is important in that it identifies new and alternative biomarkers of coastal ecosystem health. These biomarkers can be used to monitor the continuing effects of climate change in coastal environments.

Funding for Reid's lipids work is provided by grants from the RI-Science and Technology Advisory Council and RI EPSCoR (C-AIM) via the National Science Foundation’s award (#OIA-165521).

Professor Gaytha Langlois has spent several years collecting samples from Heron Island, Australia. The focus of her work is on investigating ciliate populations of the Great Barrier Reef and understanding the implications of climate warming trends on these populations of ciliates. Ciliates are single-celled organisms with short hair-like extensions called cilia that used for movement. Langlois’ studies the overall loss of microbial biodiversity as a result of climate change and the linkages of particular ciliates to coral bleaching were presented at the 2018 International Society of Protistologists (ISOP) Meeting in Vancouver, Canada, in August. Professor Langlois has been a passionate investigator of climate change and an advocate for climate change policy for many years. She notes the very recent news reports of an extreme heat wave currently occurring in Queensland, AU, which is expected to result in yet another major bleaching episode on the Great Barrier Reef. Her successes in the field of climate study led her to be elected this past year as president of the International Society of Protistologists for 2019 term.

Secrets of the Metasequoia

From the implications of warming on the Great Barrier Reef and the effects on ciliate biodiversity, we shift the focus to two more Bryant faculty members studying ancient climates in China.

Climate change has been one of the research themes in the Laboratory for Terrestrial Environments run by Professors Hong Yang, Ph.D. and Qin Leng, Ph.D. Most recently Yang and Leng were invited to write an article titled, “Old Molecules, New Climate: Metasequoia’s Secrets” for Arnoldia: the Journal of Arnold Arboretum at Harvard University. This article summarizes the past 20 years of research on Metasequoia glyptostroboides (commonly known as dawn redwood), in which both scientists were pioneers. Their work on this species has resulted in more than 20 peer-reviewed publications.

“The fossil of the Metasequoia was described as an extinct species first in Japan before its living relic population was discovered in China in the 1940s,” says Leng. “This unique, historic discovery, as well as its important scientific usage in biological and environmental sciences, has generated world-wide interest in the plant among scientists and the general public in the past seven decades.”

In 2006, as a part of the second International Metasequoia Conference held at Bryant, five dawn redwood trees were planted on campus, and since then, the trees have been used as a living laboratory by students and faculty for courses, field trips, and research.

An NSF-funded workshop hosted by Professors Yang and Leng, is in the works and will focus on providing  experiential learning on the impact of climate change for undergraduate students. Bryant University will co-organize the workshop with Texas A&M University and the Idaho Geological Survey.

It is unquestionable that climate change is a serious issue that requires the attention of scientists and citizens of the world. The National Climate Change Assessment Report is the most dire to date, and it affects everyone. From human health consequences to changes in biodiversity and loss of ecosystem stability, climate change will continue to have major impacts on life and the global economy. It is an issue that must be addressed in an interdisciplinary manner, and that is the approach scientists at Bryant are taking. Bryant faculty and researchers are working alongside undergraduates and fellow scientists around the world to assess, monitor, and find new ways to measure climate change and its impacts. The future of the world depends on it. 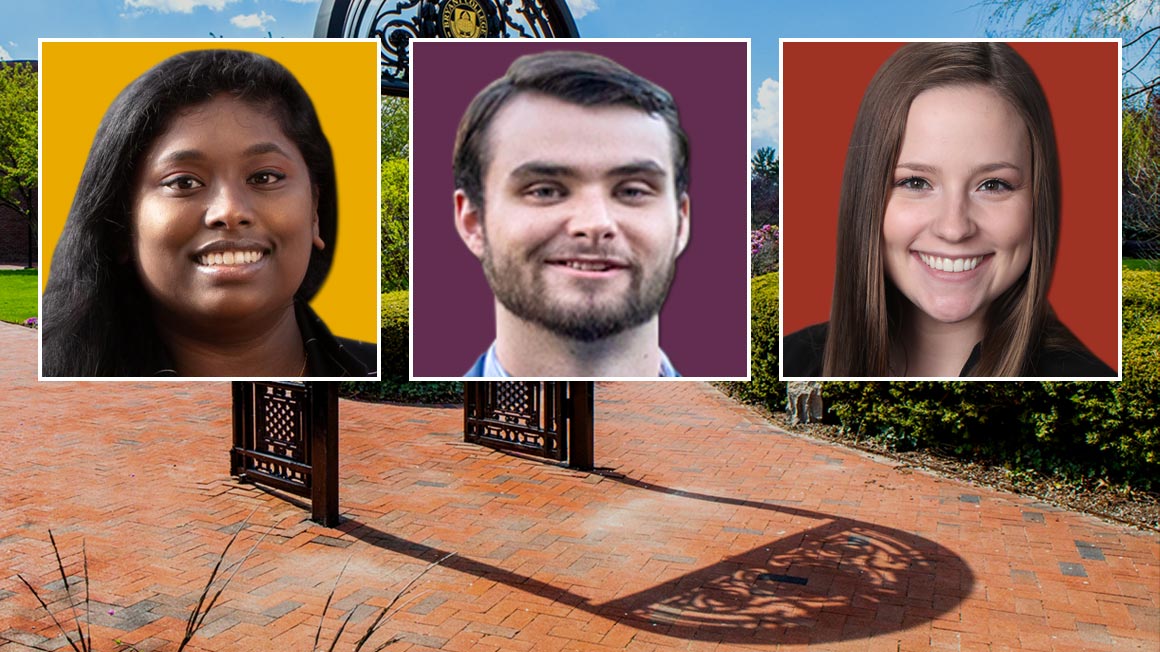 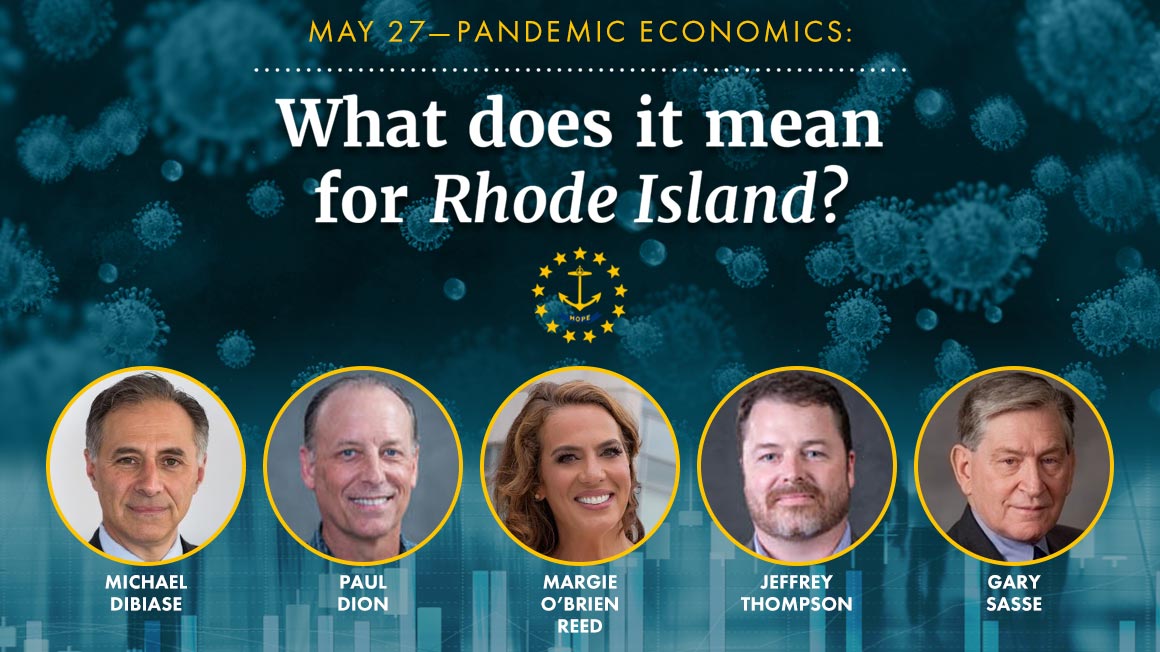 Academic Excellence
Panel on RI public finances: No easy answers on the road to recovery 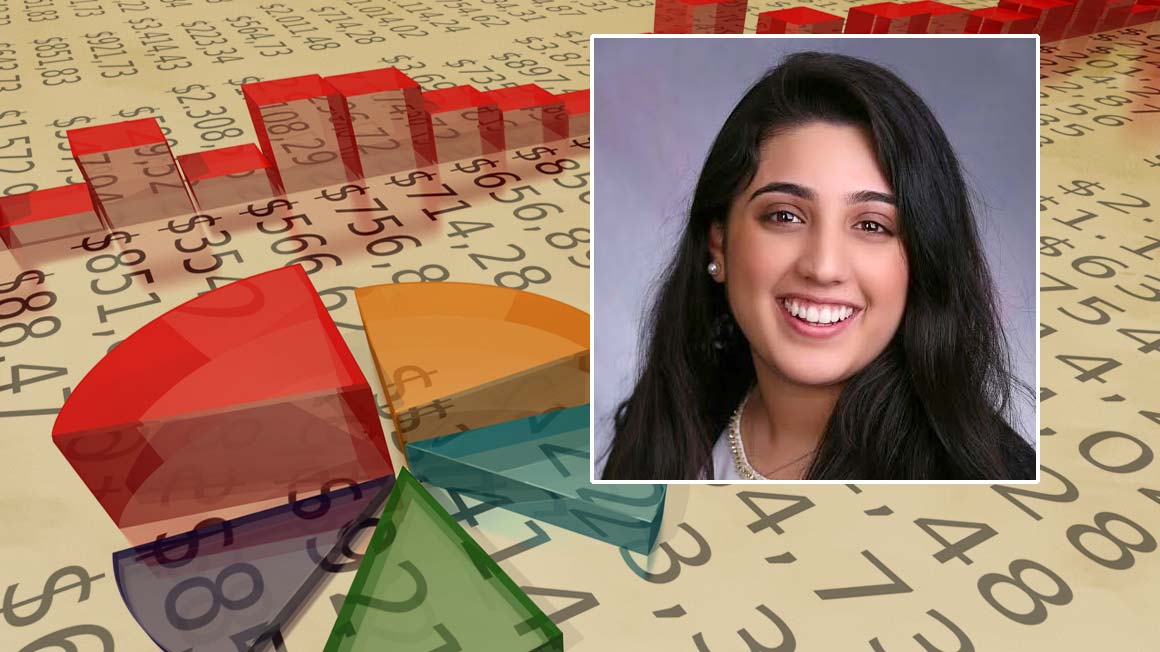 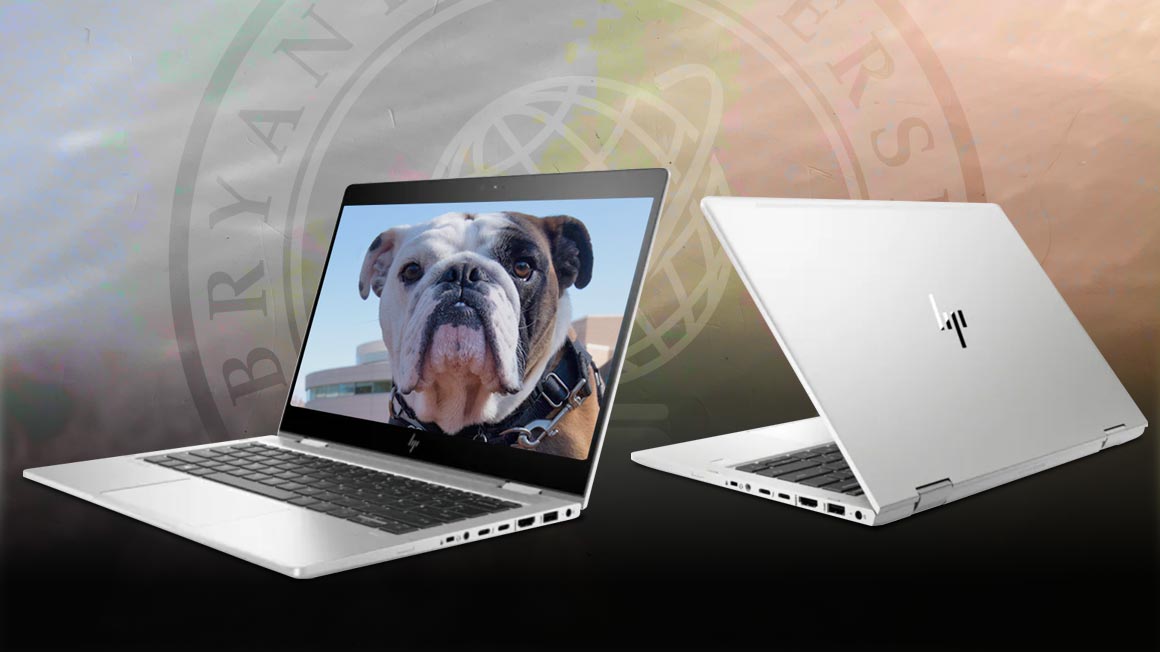 Academic Excellence
A world of resources at your fingertips 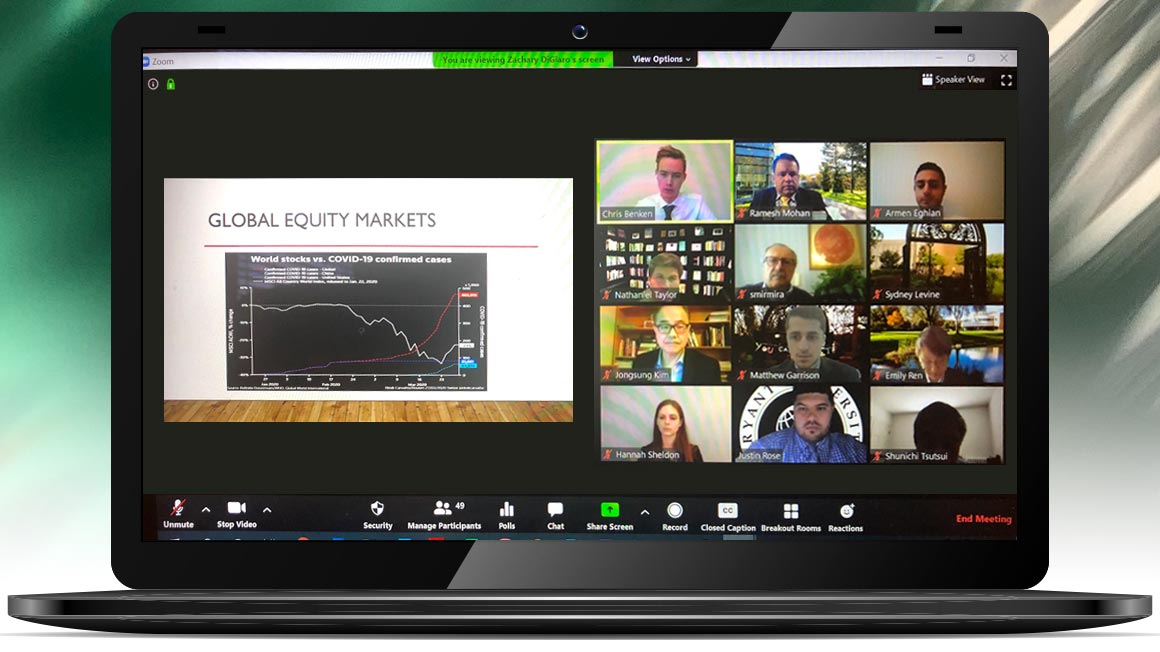