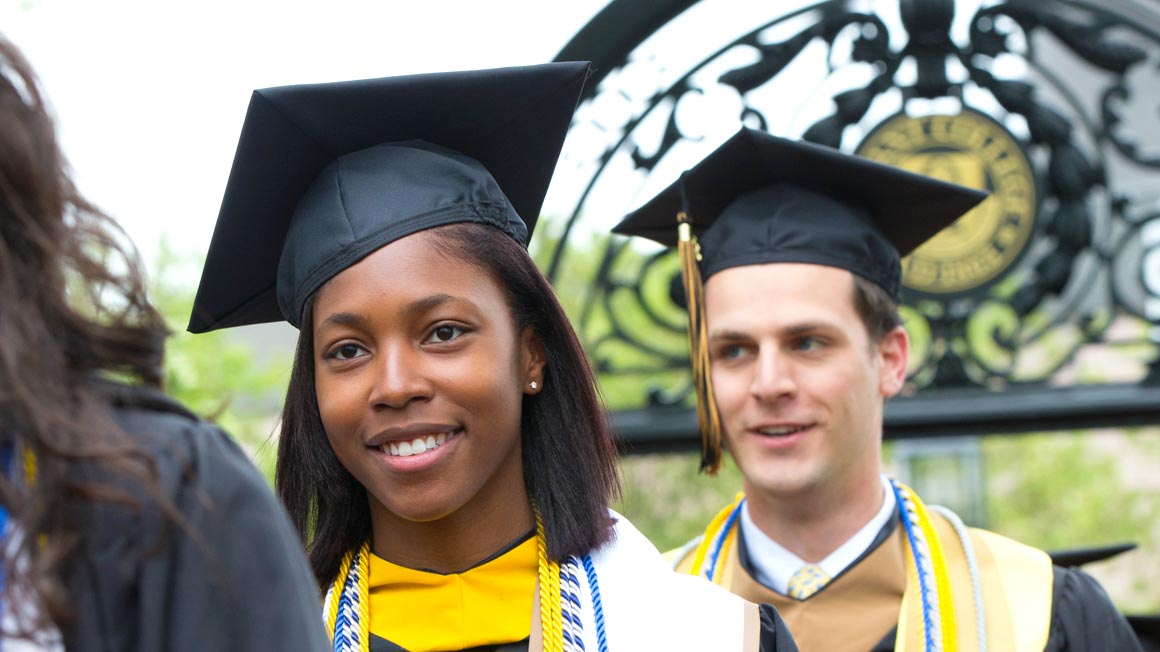 SMITHFIELD, RI – On May 16 and 18, 2019, 1022 members of Bryant University’s Class of 2019 will complete their undergraduate and post-graduate studies and be awarded a Bryant University degree which has more value now than at any time in Bryant’s history. These graduates will join a powerful network of more than 50,000 accomplished alumni who are inspired to excel and make a difference as leaders in organizations and communities around the world.

Laura K. Ipsen, president and chief executive officer of Ellucian Company, L.P., an innovative developer of software, cloud applications, and analytics for higher education institutions, will deliver the Commencement address for undergraduate students and their families.The address for Bryant’s Graduate Programs Commencement will be delivered by Edward “Ned” O. Handy III, chairman of the Board of Directors and chief executive officer of Washington Trust Bancorp, Inc. Honorary degrees will also be awarded to United States Chief Judge William E. Smith and Director of the Rhode Island Department of Health Nicole Alexander-Scott, MD, MPH.

Commencement speaker Laura K. Ipsen will receive an honorary Doctor of Business Administration degree. Ipsen became president and CEO of Ellucian in 2017, building on more than 25 years of success as a technology executive in leadership positions in Silicon Valley where she worked to drive transformation in the public and private sectors and spurred adoption of comprehensive solutions in high-growth industries. Recognized among a select group of women in the high tech field who have made a significant contribution to their industry and serve as an inspiration to others, Ipsen is known for her visionary leadership at businesses that have shaped the future of energy, cities, education, healthcare, and banking, working at premier tech companies including Cisco, Microsoft, and Oracle. Her experiences at the crux of reinvention in the cloud have given her unique insights to what matters most in providing the next generation of innovation for college faculty, students, and administrators.

Founded in 1968, Ellucian is an innovative leader in higher education technology, collaborating with more than 2,500 institutions in nearly 50 countries to enhance and enrich the experience of over 20 million students. Prior to joining Ellucian, Ipsen was senior vice president of Oracle’s Global Industry Solutions Group and senior vice president of Oracle’s Marketing Cloud business. She previously served as corporate vice president of Microsoft’s worldwide public sector organization, leading more than 2,000 employees with customers in more than 100 countries, and spent nearly 17 years at Cisco Systems, where she established the firm’s global policy and government affairs division and helped build the Connected Energy Business Unit. She also held key roles at PricewaterhouseCoopers, Acer America, and Hitachi Data Systems.

Among many accolades for her work in information and communications technology, sustainability, and gender diversity, she received a Women Making History Award from U.S. Senator Barbara Boxer. Ipsen is a Senior Fellow of the American Leadership Forum, Silicon Valley Chapter, and holds a Bachelor of Arts degree from the University of Virginia.

Chief United States District Judge of the United States District Court for the District of Rhode Island William E. Smith will receive an honorary Doctor of Humane Letters. He was appointed to the U.S. District Court for the District of Rhode Island by President George W. Bush in 2002, and has served in that role since 2013. As Chief Judge, he created the Litigation Academy to teach young lawyers practical skills for trying cases in federal court; the HOPE Court, a re-entry program offering an alternative post-conviction supervision model; and a Deferred Sentencing Program featuring a creative blend of treatment, supervision, and sentences to help young offenders stay out of prison and become productive members of society. In 2014, he received the Citizen of the Year Award from the Rhode Island Association for Justice and this June he will receive the Chief Justice Joseph R. Weisberger Judicial Excellence Award for “exemplifying and encouraging the highest level of competence, integrity, judicial temperament, ethical conduct, and professionalism.”

Active in judicial administration at both the local and national levels, Judge Smith was appointed by the Chief Justice of the United States to the United States Judicial Conference Committee on Judicial Resources, the Committee on Information Technology, and the Committee on Financial Disclosure. He was appointed by the Chief Justice to the Federal Judicial Center’s District Judges Education Committee, and subsequently became Chair. He serves as a member of the Roger Williams University Board of Trustees and is Chair of the Board of Directors of Roger Williams University Law School as well as an adjunct faculty member of the Law School. He earned his Bachelor of Arts at Georgetown University in Washington, D.C., and his Juris Doctor at Georgetown Law Center.

Director of the Rhode Island Department of Health Nicole Alexander-Scott, MD, MPH, will receive an honorary Doctor of Humane Letters degree. Alexander-Scott is the first African-American person to serve as Rhode Island’s top health official and has been called a true inspiration for those working in public health. Since her appointment in 2016, she has made the R.I. Department of Health’s principal focus to give every state resident equal opportunity to be as healthy as possible, and has established three major priorities: addressing the socioeconomic and environmental determinants of health; eliminating disparities of health and promoting health equity; and ensuring access to quality health services for all Rhode Islanders, including vulnerable populations.

In 2018, she was elected by her peers to serve as president of the Association of State and Territorial Health Officials (ASTHO), the national organization for state health directors. She has also been recognized by numerous local and national organizations, including Grow Smart Rhode Island, the Rhode Island Chapter of the American Academy of Pediatrics, and The Kresge Foundation. Dr. Alexander-Scott’s distinguished record includes extensive experience as a specialist in infectious diseases for children and adults, and as an Associate Professor of pediatrics, medicine, and public health – with a focus on health services, policy, and practice at the Warren Alpert Medical School of Brown University. She is board certified in pediatrics, internal medicine, pediatric infectious diseases, and adult infectious diseases.

Dr. Alexander-Scott earned a Bachelor of Science in Human Development and Family Studies at Cornell University. She graduated from the State University of New York (SUNY) Upstate Medical University at Syracuse and completed a combined internal medicine-pediatrics residency at SUNY Stony Brook University Hospital. Alexander-Scott completed a four-year combined fellowship in adult and pediatric infectious diseases at the Warren Alpert School of Brown University and earned a Master’s Degree in Public Health from Brown in 2011.

Graduate Programs speaker Edward “Ned” O. Handy III will receive an honorary Doctor of Business Administration degree. A respected leader in the banking industry, in 2013 Handy joined The Washington Trust Company, the oldest community bank in the United States, as President and Chief Operating Officer. He was appointed Chairman of the Board of Directors and Chief Executive Officer of Washington Trust Bancorp, Inc., the parent of The Washington Trust Company, in 2018. He previously held executive positions during his 18 years at Citizens Financial Group, most recently as President of Citizens Bank Rhode Island and Citizens Bank Connecticut. He began his career in commercial lending at Fleet Financial Group.

Handy leads a team of more than 600 employees in Rhode Island, Connecticut, and Massachusetts, who provide a full range of financial services, including commercial banking, mortgage banking, personal banking, and wealth management and trust services. In 2015, Forbes recognized Washington Trust as one of “America’s 50 Most Trustworthy Financial Companies.”