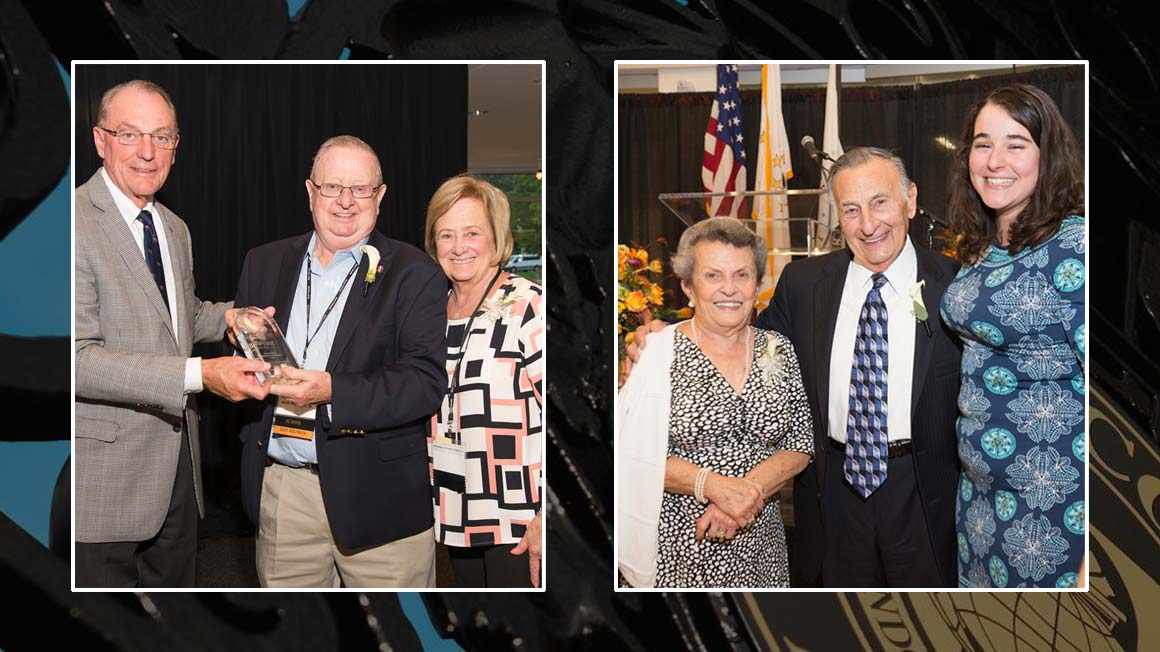 The distinguished recipients of the 2018 Champions for Philanthropy awards are James S. Richardson ’68 and Shirley Ann Richardson, Outstanding Consecutive Giving Society members, and Mary and George Agostini, Outstanding Friends of the University.

A gala dinner honoring the transformative role of leadership giving and celebrating this year’s Champions for Philanthropy award recipients was held September 21.

The Bryant University Board of Trustees and President Ronald K. Machtley honored the outstanding philanthropy of Robert P. Brown ’86 and Kathleen M. Brown, P ’19. Their multimillion-dollar cornerstone investment in Bryant’s historic capital campaign, Expanding the World of Opportunity: The Campaign for Bryant’s Bold Future, is one of the largest gifts in Bryant’s history. The University’s award-winning academic innovation center has been named the Quinlan/Brown Academic Innovation Center in recognition of the couple’s philanthropy.

The Browns were the 2014 Outstanding Alumnus Champions for Philanthropy. The tradition of honoring some of the University’s most generous benefactors as Champions for Philanthropy began in 2009. The 2018 recipients join an esteemed group of alumni, trustees, parents, and friends of the University whose private philanthropy is an investment in excellence that galvanizes others to join us in a philanthropic partnership that grows stronger each year. That transformative partnership is reflected in the success of future generations of students who are inspired to excel at Bryant.

The 2018 Champions for Philanthropy join an esteemed group of alumni, trustees, parents, and friends of the University whose private philanthropy is an investment in excellence that galvanizes others to join us in a philanthropic partnership that grows stronger each year.

James S. Richardson ’68 and his wife, Shirley Ann, have been making gifts to Bryant for more than four decades. Their early gifts signaled gratitude to the place where they met and where James earned a degree that enabled him to teach high school business courses and, later, enter the business world as an accountant who rose to CEO of the J.R. Group, overseeing a family business that encompasses four thriving automobile dealerships.

James, who received Bryant’s Distinguished Alumnus Award in 1995, also supported Bryant through nine years of service as a member of the University’s Board of Trustees. Shirley serves their community as a Trustee of Samaritan Healthcare & Hospice in New Jersey.

For these Outstanding Consecutive Giving Society Members, giving consistently, year after year, is simply “the right thing to do.”

Outstanding Friends of the University

More than a decade ago, a call from President Ronald K. Machtley checking the status of a new residence facility cemented a business deal with George Agostini, Chairman and CEO of Agostini Bacon Construction Company, and launched a philanthropic partnership with George and Mary Agostini. That partnership, reflecting the couple’s deep Catholic faith, has impacted Bryant students in life-changing ways.

Impressed with the campus culture, Bryant’s focus on developing ethical leaders with character, and the leadership of President Machtley and his wife, Kati, the couple established a multi-year Partners in Scholarship fund to honor George’s late brother, Dominic Agostini ’74.

The Agostinis’ generous gift in support of Expanding the World of Opportunity: The Campaign for Bryant’s Bold Future incorporates and permanently endows the existing scholarship as the Agostini Family Endowed Scholarship. The gift also provided major support for the University’s Christian Campus Ministry, and their continuing support funds programs, events, and activities that help Christian and Catholic students deepen their faith through service, spiritual development, and educational programming.

Each year, students return from Alternative Spring Break opportunities with perspectives and lives transformed through their service.

Mary and George Agostini exemplify an essential lesson that our students learn through service and model with leadership – life is about helping others.