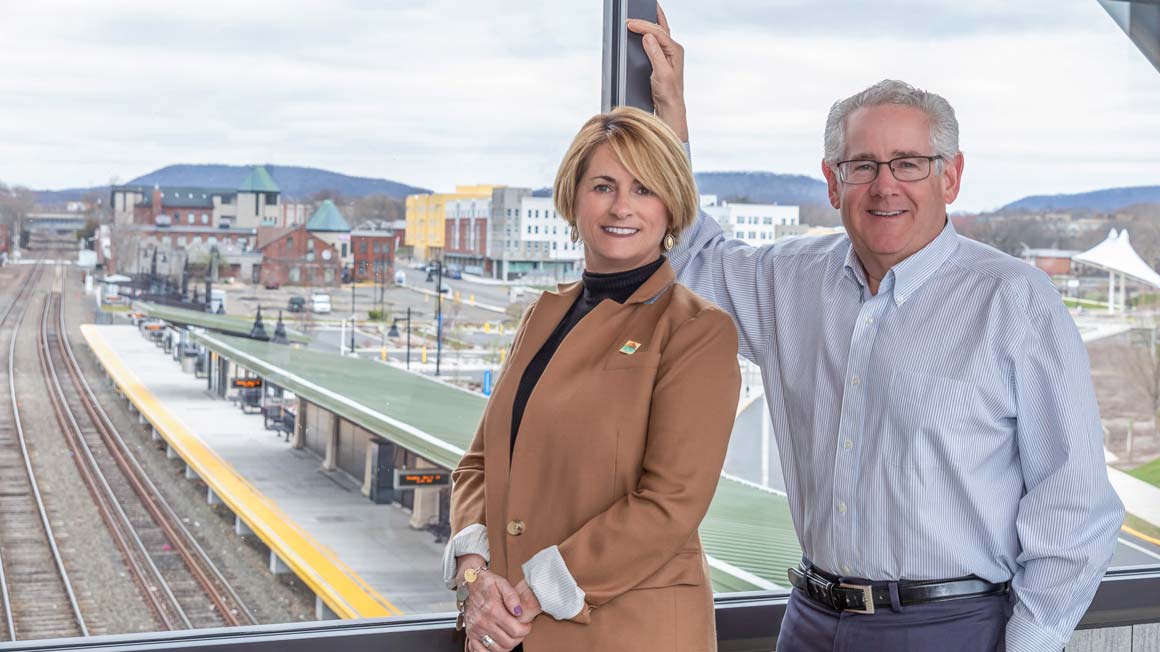 It all started in Professor John Zeiger’s Interpersonal Communications class. Now, three decades after collaborating on marketing and other class projects, David Cooley ’82 and Lisa Sattler-Biesak ’82 are together again, joining forces as Co-Directors of the new Making Meriden Business Center (MMBC). They are embracing their part-time-plus roles to help revitalize the historic downtown neighborhood in Meriden, CT, once an industrialized city known as the world’s “Silver City."

“Experts say it takes at least 5 to 10 years to turn a city around,” says Cooley, a Meriden native who together with his wife, Betty, raised a family in the city. “But I think we’re ahead of that schedule because of significant infrastructure investments from the city and state, plus the support of dedicated volunteers and community stakeholders,” he says. “Lisa has done great work programming events and arts focused on place-making that are quick and inexpensive to execute.”

Through their respective extracurricular activities at Bryant, Cooley and Sattler-Biesak gained invaluable skills like programming events, marketing, budgeting, and coordinating group activities. They use these skills in their work at the MMBC, which celebrated its first anniversary in March. “Involvement in clubs like the Student Programming Board (SPB), The Archway, and Ultimate Frisbee at Bryant gave us real-world experience providing solid ground to launch from,”  Sattler-Biesak recalls.

Both Cooley and Sattler-Biesak, who is married to John Biesak ’80, have remained good friends with dozens of alumni and both have collaborated with other Bryant alumni during their professional careers, including on MMBC initiatives. For example, it was easy to call on professional photographer Sandy Musumeci Aldieri '82 to capture the shots for this piece. And Cooley spent 15 years helping to successfully build Evalueserve along with  Bob Daigle '82.

Over the years, Cooley and Sattler-Biesak remained friends connecting at regular coffee meet-ups; says Cooley, “It was during one of these coffee klatches in 2017 that our partnership in Meriden was triggered,” Cooley says. “We instinctively seem to know what needs to get done. One plus one equals three.” Sattler-Biesak notes that Cooley’s "deep local roots and approachable man-on-the-street demeanor plays a huge role in our successes.”

At MMBC, with a shoestring budget, the duo focuses on low-cost or free initiatives to promote downtown Meriden as a vibrant, green, and accessible urban center. They also provide business advice and coaching to budding entrepreneurs in the newly branded Artists Colony district. Last year, they worked with local sponsors and a core group of volunteers to create Meriden’s first YuleFest, a community celebration where Santa arrived on the new CTRail commuter rail. Residents enjoyed food trucks, street performers, live art demos, and a popup marketplace in downtown Meriden.

Meriden is an affordable 20-minute train between Hartford and New Haven and is centrally located between Boston and Manhattan. “Young professionals, empty- nesters, and entrepreneurs working in either city can find far more affordable housing options in Meriden,” says Cooley. Meriden’s newly designated Opportunity Zones offer a new investment tool that can help Meriden rebound by giving investors the chance to reap tax benefits. With 14 acres of walking trails and an outdoor concert venue recently completed, the Meriden Green, directly across the street from the train station, is yet another beautiful community asset. Nearby is Hubbard Park, an 1,800-acre venue offering gorgeous vistas for hikers and bikers.

Noting Meriden’s rich arts history during its silversmith era, Sattler-Biesak says, “we know that arts can be an significant economic driver, so we are working hard to combine the arts with technology.” With that in mind, they are incubating a new pop-up arts gallery that offers a digital paint experience and therapeutic art as well as a hub for artists to gather and showcase their art. Together with Meriden’s artist-in-residence, this initiative has attracted an underground artists’ network to the city. “We create places and spaces for them to network and show their work, including monthly Arts Renaissance events at the renovated Silver City Ballroom,” she says.