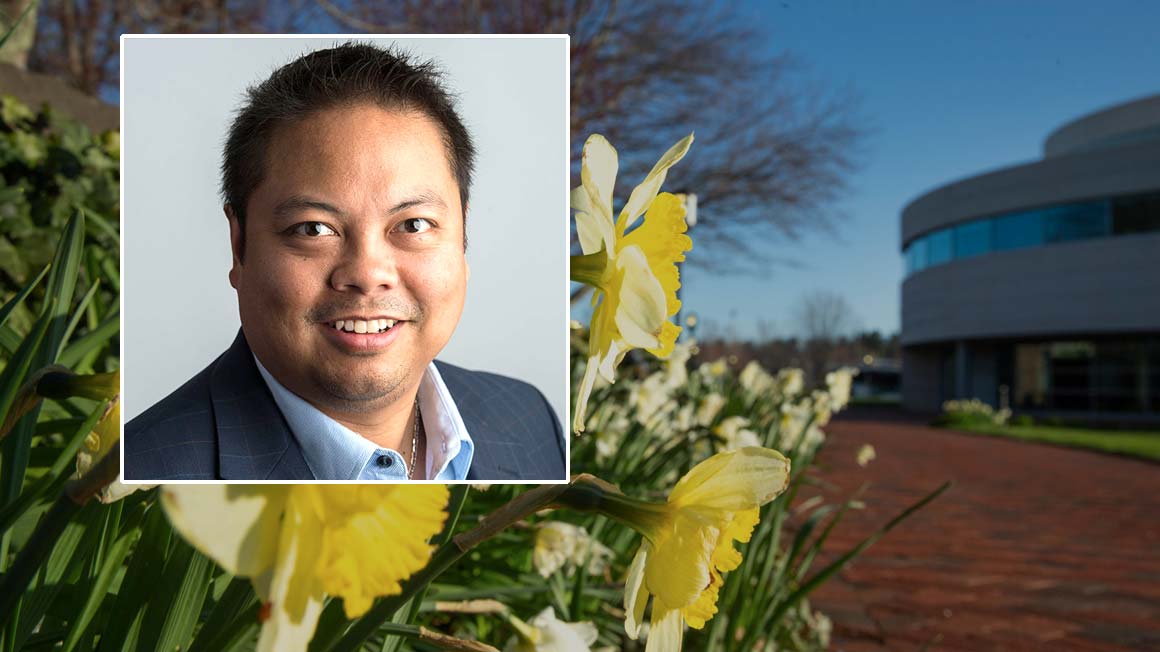 For David Suaviso, Jr. '96, a planned gift is part of a lifelong connection
Apr 30, 2020, by Jeffrey Stupakevich

From the moment he arrived on campus in 1992, David Suaviso, Jr. ’96 knew that he was forging a connection that would last a lifetime. Now, his planned gift to Bryant reflects the gratitude that he’ll always have for the school that changed his life.

Suaviso has served as Regional Sales Manager at Sharp Electronics for the past seven years, part of a successful 15-year career in sales in the Audio/Visual industry. He says he chose Bryant because he wanted a school that could prepare him for “the real world,” but even before he arrived, he had already begun to realize that Bryant was a special place.

Suaviso was a competitive bowler in high school and wanted to find a college that would allow him to pursue both business and bowling. He considered several other schools, but his friend, the St. John's University bowling coach, who knew of Bryant’s reputation as a top business school, told him, “If you can go to Bryant, you should go.” Suaviso says now, “By telling me that, he did me a huge favor.”

After one visit, he fell in love with Bryant. Far enough from home on Long Island, but not too far. A big, beautiful campus, but not too big. And, after Suaviso had been accepted, a Long Island-based alumnus from the ’80s who was volunteering for the admissions office called him to encourage him to attend. “That really sealed the deal for me,” he said. “No other school did anything like that.” It was his first glimpse of the power of the Bryant alumni network.

Throughout your life, whatever challenge you’re facing—job transitions, professional setbacks, big career decisions, network building—there are always Bryant alums out there who can, and will, help you.

During his first week as a student, he attended a Student Alumni Association (SAA) meeting. “I wasn’t thinking about being an alum someday. I was thinking about meeting people and having a good time.” But, he soon saw the many ways that alumni remained connected to Bryant, and how they supported students. He would later become president of the SAA, as well as a member of the Student President’s Advisory Council and an orientation leader. “Those four years at Bryant really helped me get out of my shell,” he says, now. “I had always thought of myself as a shy kid, but it wasn’t long before I was one of the louder Long Islanders on campus.”

Now, whenever he returns to campus or attends Bryant events, he always tells students to get involved early with the alumni association. “Throughout your life, whatever challenge you’re facing—job transitions, professional setbacks, big career decisions, network building—there are always Bryant alums out there who can, and will, help you.” Suaviso believes that the friendships, the relationships, and the network that students build during four years on campus are at the heart of the Bryant experience. “When you’re part of the Bryant family, even if you’re not close friends, you still look out for other alums, you try to do business with them, and support them whenever you can,” he says.

I give what I can each year, and a planned gift allows me to make a much larger commitment—one that represents everything Bryant has given me.

It is this sense of family, he says, that drives his desire to give back to Bryant. Along with his ongoing and enthusiastic volunteering and advocacy, Suaviso has recently made a significant planned gift to Bryant. Though he is just now entering middle age, he has decided that it is the right time for him to consider his estate planning. The loss of both his parents—most recently his mother’s passing just over a year ago—has given Suaviso a deeper perspective as he thinks about his future.

“I think a lot of people don’t know very much about planned giving. I had always thought that bequests and leaving Bryant in my will was something that much older people decided to do,” but he says he learned a lot speaking with the Development team at Bryant. “I’m certainly not rich, and I’m not able to give a large gift today,” he says, “but I give what I can each year, and a planned gift allows me to make a much larger commitment—one that represents everything Bryant has given me.”

He says that his friends sometimes tease me him for his strong school spirit and enthusiasm for Bryant, but he is quick to offer a reminder. “I tell them, without Bryant, a lot of us wouldn’t know each other. So, for me, it makes sense to give something back to a place that’s been such an important part of my life, and an institution that I love.”

If you would like to learn more about how you can make an impact on the lives of Bryant students through a planned gift, contact Ed Magro at emagro@bryant.edu or 401-232-6528.