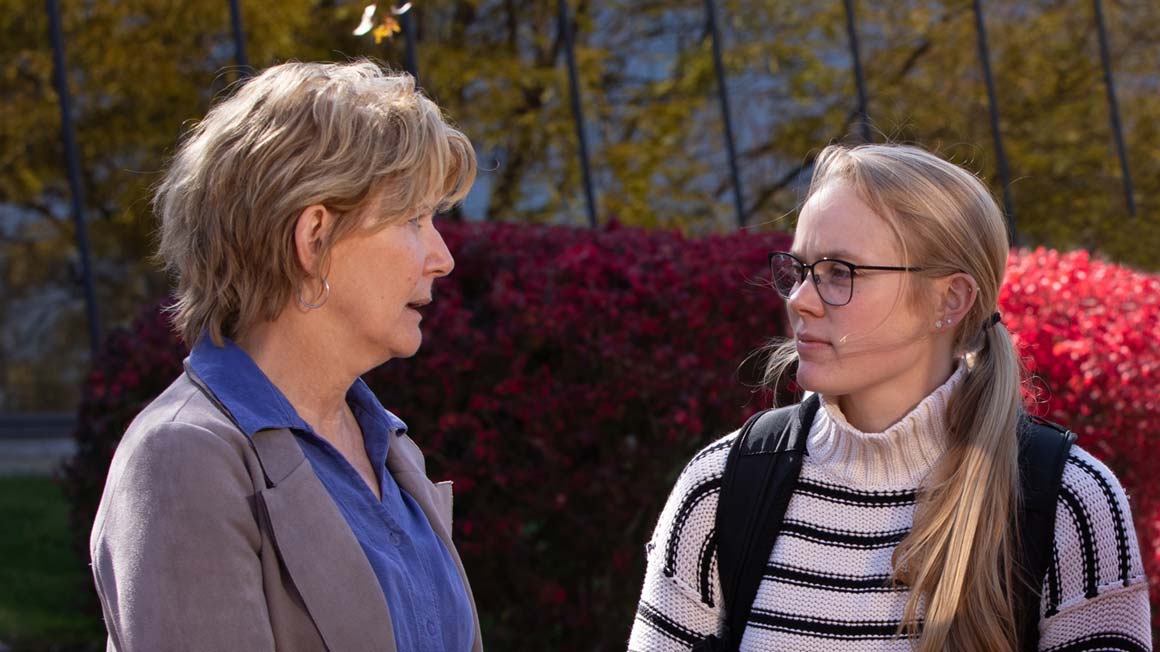 The qualities that Professor of Sociology Judith McDonnell, Ph.D., (left) brings to the classroom helped lead Emily Cluck '20 (right) to discover an intellectual passion that is leading to research and graduate school.
For Emily Cluck '20, Sport Studies ignited passion for issues of representation
Feb 05, 2020, by Staff Writer

“Sports? You can study sports?”

That was Emily Cluck’s initial reaction when her roommate mentioned a research project she was undertaking as part of her Sport Studies concentration. The interdisciplinary program examines sport from a wide range of perspectives, including sociology, economics, psychology, communication and media production, law, and statistics. Cluck, a sophomore at the time and a member of the women's track and field team, was intrigued.

Soon after, Cluck signed up as a Sport Studies concentrator. Her curiosity turned into passion when she took Sociology of Sport, taught by Professor of Sociology Judith McDonnell, Ph.D., Sport Studies Coordinator. The course focuses on the global aspects of sport, with an emphasis on the relationship between sport and race, class, gender, sexual orientation, and national identity.

Professor McDonnell “is really open to other perspectives. She pays attention to what you have to say.”

It was McDonnell's teaching style that sparked Cluck's academic aha moment. “She makes class really interesting. She’s engaging with us, and she’s really open to other perspectives. She pays attention to what you have to say.”

As a result, Cluck says she started seeing things she'd overlooked, in particular the underrepresentation of women in sports. Professor McDonnell “really sparked my interest in this topic. I realized I had many relatable life experiences—from seeing the lack of female sports anchors to never having had a female coach. I didn't realize the importance of that until I took the class.”

“I’m excited to shine awareness on an issue I’m passionate about.”

Readings that McDonnell provided outside of class furthered Cluck's interest. “It’s clear that Professor McDonnell is always thinking about all of these things,” Cluck says. “She has such a deep understanding of the topic. It makes me want to work really hard.”

“Emily's intellectual interest and passion are quite impressive,” notes McDonnell, who says sharing ideas with students is an honor. “I believe as a teacher I learn just as much from my students as my students learn from me.”

With McDonnell's guidance, Cluck, now a senior, has carved out a research project exploring the underrepresentation of women in sport. “I’m excited to shine awareness on an issue I’m passionate about,” she says.

Cluck also is preparing for a professional life that will make use of her interest in inclusivity and diversity. She intends to pursue a career in higher education administration, where she hopes to interact with students to help improve their lives. To get there, she's taking her studies further, with a master's degree program.

After being accepted into multiple graduate schools, she has chosen to attend the Master's in Education in Higher Education program at Merrimack College, where she was also awarded a fellowship position as a Student Athlete Academic Support Specialist.

Says McDonnell, “All of this is a reflection of Emily owning her education, being willing to share what she learns, and her ability to work independently”—skills that will be immediately applicable for success in graduate school.