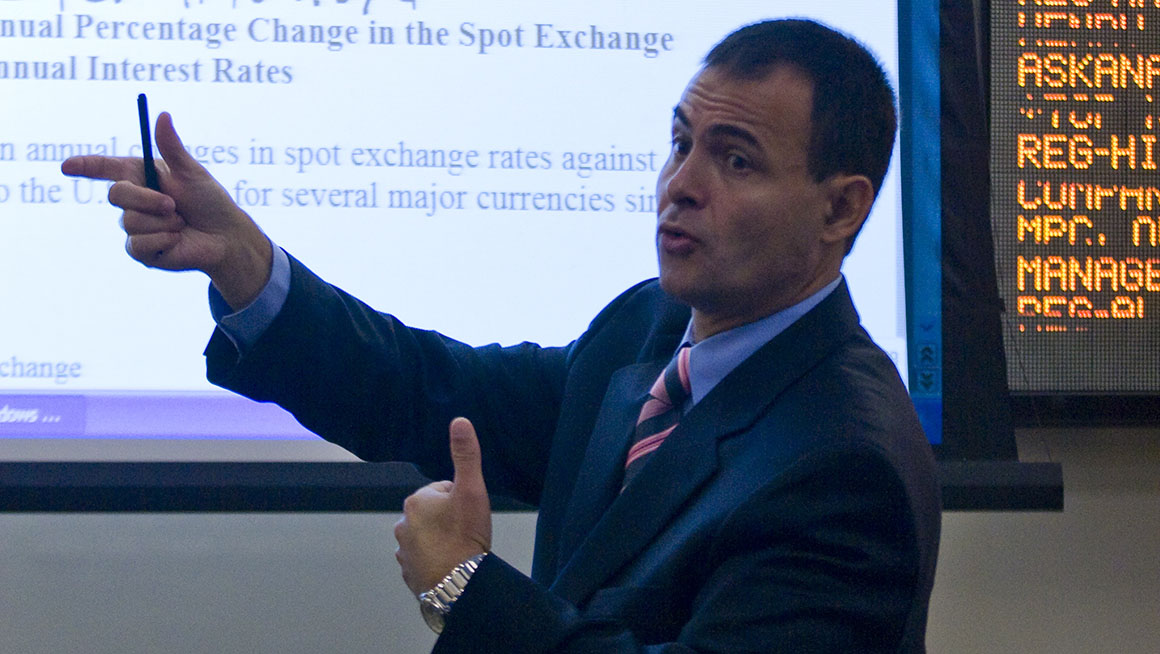 How can the Bryant curriculum prepare students for a new economy?
Jul 24, 2018, by Staff Writer

A technological revolution that will change industry and jobs is on its way.

The Fourth Industrial Revolution, according to the World Economic Forum, "…is characterized by a range of new technologies that are fusing the physical, digital, and biological worlds, impacting all disciplines, economies, and industries, and even challenging ideas about what it means to be human."

Bryant President Ronald K. Machtley and Finance Professor Hakan Saraoglu, Ph.D., examined the advent of this revolution, and how we can prepare for it during a recent TEA Talks sponsored by Academic Affairs.

"I feel like a kid in the candy story in this Fourth Industrial Revolution," said Saraoglu, who studied to be a multidisciplinary engineer with an emphasis on computer programming. "It's almost like the world moved to what I was trained for."

Starting about 15 years ago, Saraoglu began to ask a seemingly simple question. Over the course of its history, the United States evolved from agriculture, to agriculture processing, to different levels of complexity in industry, to service. "So," he asked, "where does the U.S. graduate from being a service economy?"

When pressed by students for an answer, the professor told them: "We're going to graduate to a system design economy." The United States will design business models and systems that are then deployed worldwide.

"That's actually happening right now," Saraoglu noted, citing Uber as a business that doesn't require buildings and the business model for the iPhone involves an enormous complexity of rules. Those rules include signals in space to subscription rules, renewal terms, hardware, software, and other provider connections.

There are many competing ideas about how to be successful in the Fourth Industrial Revolution. One model suggests that it requires a breadth of knowledge in different areas as well as a depth of knowledge in an area of expertise. Saraoglu argued, however that "this is not enough. One has to have meta meta cognition." Employees of the future need to be able to understand, evaluate, and redefine the rules.

Through rich discussions 20 years ago among faculty and staff, Saraoglu said, Bryant correctly focused on the most important traits needed for success in the Fourth Industrial Revolution: character and self-management. "This is part of the meta," he noted, a self-regulating manager with ethics and respect who can understand the complexities of the connections linking complex networks and systems.

What skill sets are needed to succeed?

President Machtley noted that while techno-pessimists may say the Fourth Industrial Revolution is going "present serious challenges," that is not the only view. "The techno-optimists are saying it's going to be great," he said. "People who have technology backgrounds, who have data science backgrounds, who can deal in the models that Professor Saraoglu is talking about, they're going to be the winners."

"This has some serious implications for us," Machtley said. "When a mathematical formula gives an answer, is it the right answer?" he asked. How are we going to embed the interaction of human intelligence with artificial intelligence?

Machtley, a former Navy officer who trained as an engineer, recalled once being on a ship where the crew relied on an early naval tactical data system to report its location. No one realized when the system malfunctioned. Even as the ship went way off course, "across the boot of Italy and up through Europe," he said, "no one realized mistakes were being made."

The same thing could happen on a larger scale, Machtley said, "if we allow the computer to learn and to re-learn and we are not interacting with it as it is re-learning. We could find ourselves making very bad decisions and going way off course. And so, we can't just teach students to become blind followers of technology or mass data and supercomputing."

This is a very exciting time, Machtley continued, because we're going to see new ways of looking at disease, farming, biotechnology, and robotics, as well as new ways of considering issues we couldn't even process or engage with before big data and quantum computing.

"But," he added, "it's going to have some serious consequences." Machtley said he approached the Fourth Industrial Revolution by considering how we think about educating students. "What skill sets should we be thinking about to make sure that our students will be the ones who enter the workplace and say: "Okay, we're ready to deal with this!"

How Bryant's curriculum can ready students to take their place in the new economy is just one question for deans, faculty, and staff to consider, noted Director of Faculty Development and Innovation Edward Kairiss, Ph.D. "How do we address those needs?"