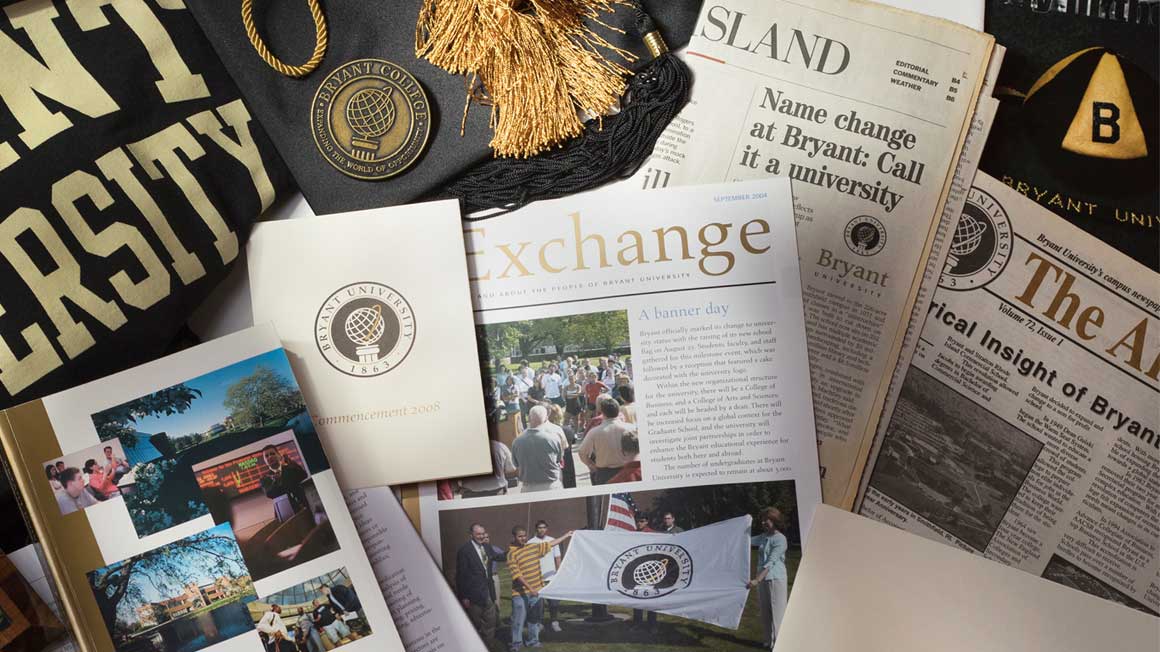 This article, a preview of the fall 2018 issue of Bryant magazine, explores the impetus for a project that placed Bryant in the vanguard of higher education.

Boldly reimagining higher education and forging a model that anticipated the future, Bryant College took a transformative step in 2004, becoming Bryant University and formally integrating the studies of business and the liberal arts.

In creating the requirements of its integrated curriculum infused with real-world applications, Bryant gave students an unprecedented path to reach their full potential and achieve success in their lives and chosen professional fields. The first class to benefit from the new curriculum graduated in 2008, and, in the decade since, Bryant’s visionary curriculum has delivered an exceptional return on education investment.

“Bryant University’s idea is very special: that every graduate of the College of Business also has a minor in liberal arts, and that every grad of the College of Arts and Sciences also has a minor in business administration,” said Jeffrey Sachs, Ph.D., ’12H, director of the Center for Sustainable Development at Columbia University and a senior advisor at the United Nations. “This is truly path-breaking, and just what’s needed in today’s society.”

A national call for a new approach

In 2002, the Association of American Colleges & Universities argued for an end to “the traditional, artificial distinctions between liberal and practical education."

Though established in 1863 as a business school, Bryant has always offered a broad-based curriculum. A college flyer from the late 1860s listed courses in geography, poetry, and philosophy alongside classes in banking, foreign and domestic exchange, and commercial law. A 1930s course catalog describing “A Liberal Business Education” included psychology, English, economics, and public speaking.

At the time of Bryant’s 2004 transformation, finding an effective way to combine business and the liberal arts had been a national concern in higher education for more than a century. As early as 1890, Harvard President Charles William Elliot lauded the idea of integrating the two, stating that it would lead to “accuracy in observation, quickness and certainty in seizing upon the main points of a new subject, and discrimination in separating the trivial from the important in great masses of facts.”

By 2002, the Association of American Colleges & Universities (AAC&U) argued for an end to "the traditional, artificial distinctions between liberal and practical education" in its report, “Greater Expectations: A New Vision for Learning as a Nation Goes to College.”

The best kind of education, it suggested, “prepares students for active participation in the private and public sectors, in a diverse democracy, and in an even more diverse global community.”

In a 2004 follow-up article, E. Byron Chew and Cecilia McInnis-Bowers went further. “Colleagues from business and liberal arts,” they wrote, “must explore and challenge the intent and consequences of the separation, indeed dissociation, between their respective domains, particularly from the student's perspective.”

"We have consistently focused on providing the highest possible value and most relevant experience for our students."

At Bryant, 2004 marked a year of significant changes, says Professor and Chair of History and Social Sciences John Dietrich, Ph.D. With the creation of the two degree-conferring colleges, Bryant required that a student’s major in one college be supplemented by a complementary minor from the other, a requirement that was groundbreaking at the time and one that remains distinctive to this day.

But how should that requirement play out? Guided by a bold strategic plan, Bryant’s Curriculum Committee recognized that students would benefit from a coordinated approach to the joining of the liberal arts and business, one that would offer students a broader, richer education and lead to in-depth understanding, says Dietrich.

Former Vice President for Academic Affairs V.K. Unni, D.B.A, and Finance Professor Jack Trifts, Ph.D.; and Distinguished Professor of History David Lux, Ph.D., the first deans of the College of Business and College of Arts and Sciences respectively, were crucial participants in crafting the integrated curriculum proposal. “We see the development of the two colleges as a joint venture,” Lux noted at the time.

“This,” Lyons recalled, “was about what was best for the student experience.”

“We have consistently focused on providing the highest possible value and most relevant experience for our students, combining a first-rate academic education with opportunities to develop the character attributes that will assure their success as Bryant graduates,” he said in celebrating Bryant’s transition from college to university.

“To do this, we pay close attention to the business and economic environment in which we operate. We innovate, evolving our curriculum to meet the demands our graduates will face in their careers. We challenge ourselves to always do better, knowing our students want and deserve nothing less.”

Combining liberal arts and business “is like being Socrates in the morning and Steve Jobs in the afternoon."

By integrating the study of business and the liberal arts, Bryant University unleashed a powerful synergy, setting itself apart from peer institutions.

“The integrated curriculum is one of our distinguishing features,” says Associate Dean of the College of Arts and Sciences Wendy Samter, Ph.D., who joined the Bryant faculty as Chair of the Communication Department just as the University launched its integrated curriculum. “We have something that is very beneficial to students, but is not easily duplicated.”

Few professional positions are as siloed as academic majors are, Samter says, noting that individuals with a breadth of knowledge and skills are better prepared for professional success. By completing a minor in the complementary college, liberal arts majors gain much-needed background in business that aids their marketability and provides knowledge of the professional sphere. And for business students who minor in one of the liberal arts? They gain a broader perspective, critical thinking skills, and a fuller sense of the world.

“You don’t have to be an expert in everything, but you need to understand what people are asking,” Dietrich says. “With a minor, you at least know the language, no matter what field you are an expert in.”

Combining liberal arts and business “is like being Socrates in the morning and Steve Jobs in the afternoon,” says Professor of Accounting Michael Lynch, J.D. “It’s important that students open themselves to new cultures, ideas, and ways of looking at the world… Using a baseball metaphor, graduates must be adept at working both sides of the plate, so they can be prepared for whatever is thrown at them.”

Those new perspectives offer surprises in the classroom and beyond. When he teaches international relations, Dietrich notes that students often reference ideas, case studies, and discussions from their International Business classes. Alumni acknowledge the benefits of the integrated curriculum in career success, Samter and Dietrich say. “Imagine being the sole candidate for an accounting position with additional expertise in communication,” Samter says. “That edge creates a competitive advantage.”

The fascinating combinations of liberal arts and business subjects that students assemble – and how they use them – consistently impress Lyons. “They appreciate the idea that sometimes it’s their minor that ultimately makes their resume look different, or they come to love their minor, which becomes their focus for graduate school or their career path,” she says.

An endorsement for Bryant's ideas

Since 2004, Bryant’s path has enjoyed a wave of support. A national study published in 2012 by the Carnegie Foundation for the Advancement of Teaching found that most undergraduate business schools' curricula were still too narrow, failing to challenge students to question assumptions, think outside the box, and recognize the business role in the larger arena.

The foundation’s recommendation – integrate the best elements of liberal arts with business – endorsed the ideas behind Bryant’s forward-looking curriculum integration. “Business and liberal learning must be woven together to prepare students for their professional roles and work and also to prepare them for lives of social contribution and personal fulfillment,” the study stated.

A June 28, 2016, Atlantic.com article, “Why America’s Business Majors Are in Desperate Need of a Liberal-Arts Education,” further underscores the value of Bryant’s decision. “Beyond the career advantages that these skills confer, there’s a broader case for offering a liberal-arts education to the hundreds of thousands of students who graduate every year with business degrees,” wrote Yori Applebaum, senior editor for politics at The Atlantic, who holds a Ph.D. in history from Brandeis University and previously taught at Harvard University. “It doesn’t just increase their economic competitiveness, it also strengthens their ability to contribute to the broader society, and to lead fulfilling lives.”

“Executives and hiring managers place a high priority on graduates’ demonstrated proficiency in skills and knowledge that cut across majors."

As calls from employers for individuals who can marry liberal arts and business skills grow louder, Bryant students and alumni see the benefits of the integrated curriculum firsthand as organizations eagerly recruit Bryant students for internships and jobs.

“Fulfilling the American Dream: Liberal Education and the Future of Work,” a 2018 report commissioned by the AAC&U, summarized the findings of two national surveys – one of business executives at private sector and nonprofit organizations and another of hiring managers. The report found that, consistent with the findings from six earlier surveys commissioned by AAC&U, “employers overwhelmingly endorse broad learning and cross-cutting skills as the best preparation for long-term career success.”

When hiring, “executives and hiring managers place a high priority on graduates’ demonstrated proficiency in skills and knowledge that cut across majors,” the report noted. Both groups, the report said, placed high value on oral communication, critical thinking, ethical judgment, and written communication.

The evolution of Bryant's integrated curriculum continues with such additions as the nationally recognized First-Year Gateway, Sophomore International Experience, and the design-thinking immersion program known as IDEA – Innovation and Design Experience for All.

Through these initiatives, Bryant remains ahead of its peers in ensuring the education of the whole person by preparing students to explore and appreciate new ideas, solve big problems, and find personal as well as professional success.

This year, Bryant’s Curriculum Committee reviewed 84 proposed curriculum changes – a fairly typical number, notes Lyons, who chairs the committee. “The curriculum is always changing,” she says. “We rethink what we’re doing and we’re responding to what students need and the contributions new faculty have to share. That’s one of the reasons we stay cutting edge.” 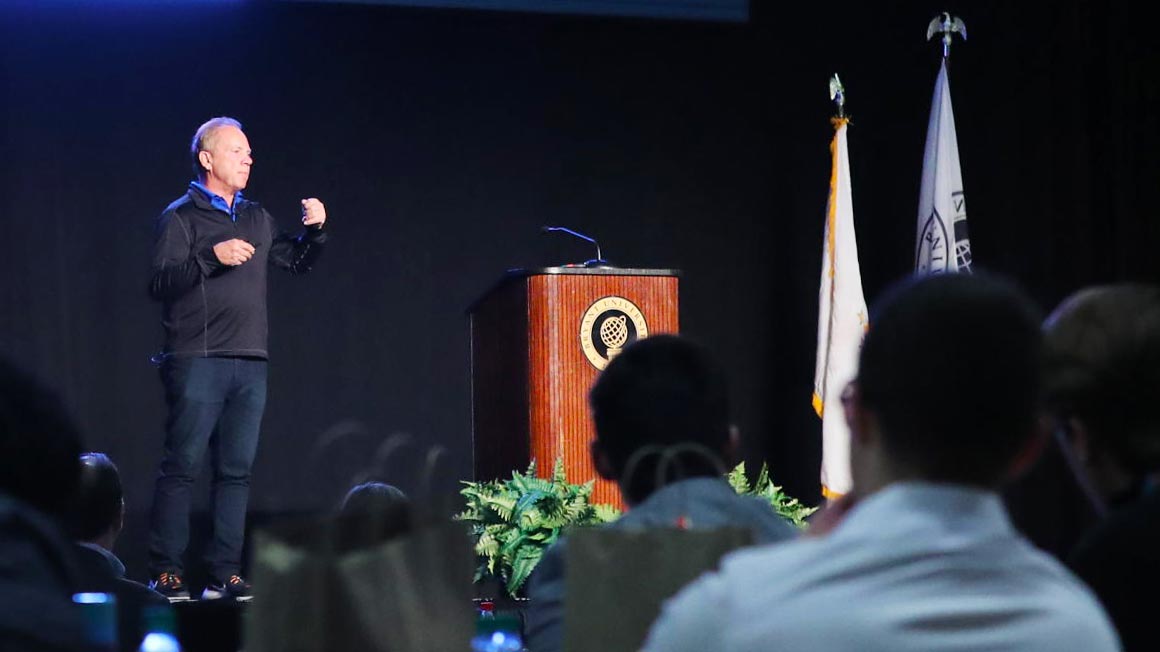 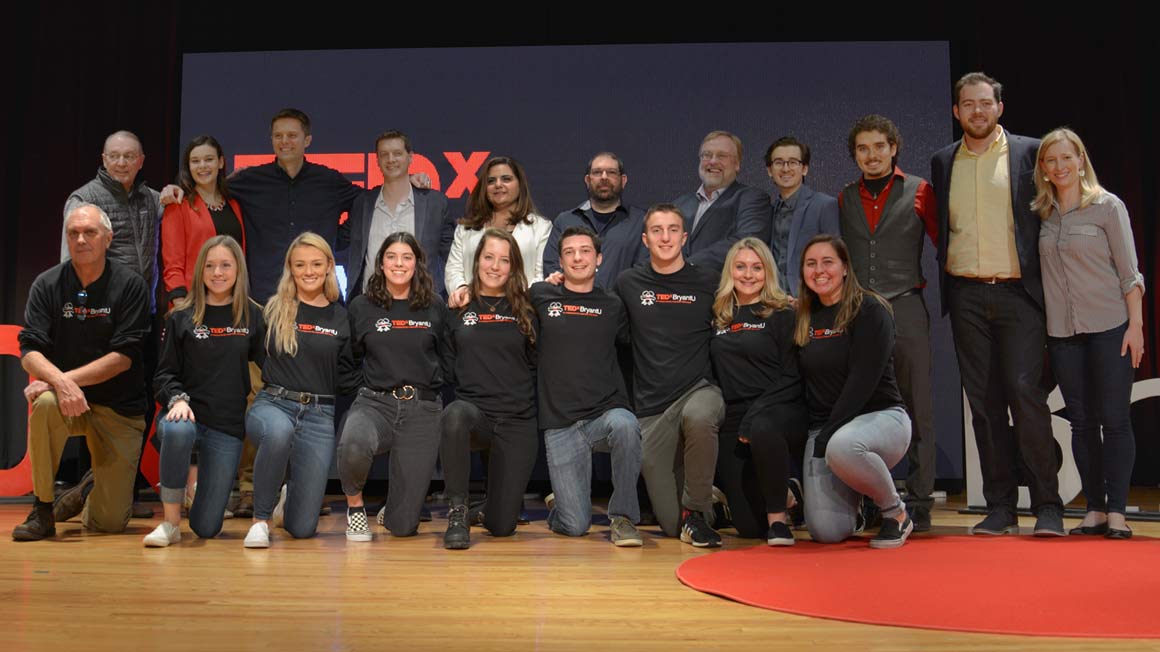 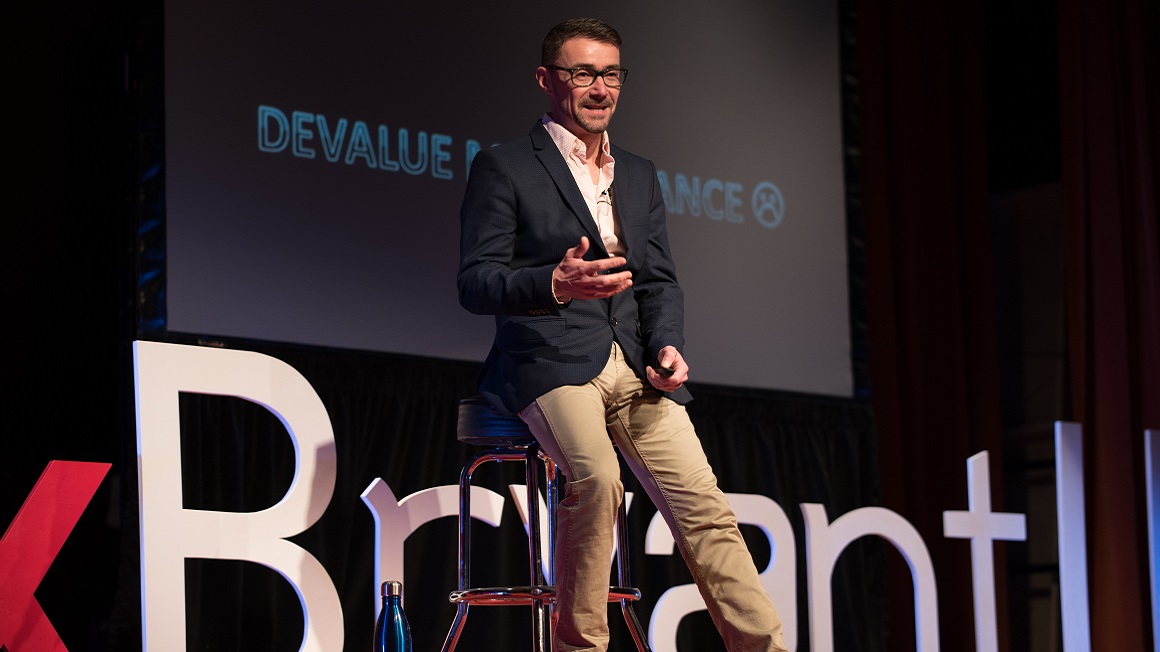 Innovation
TEDxBryantU 2019 to explore the keys to the future 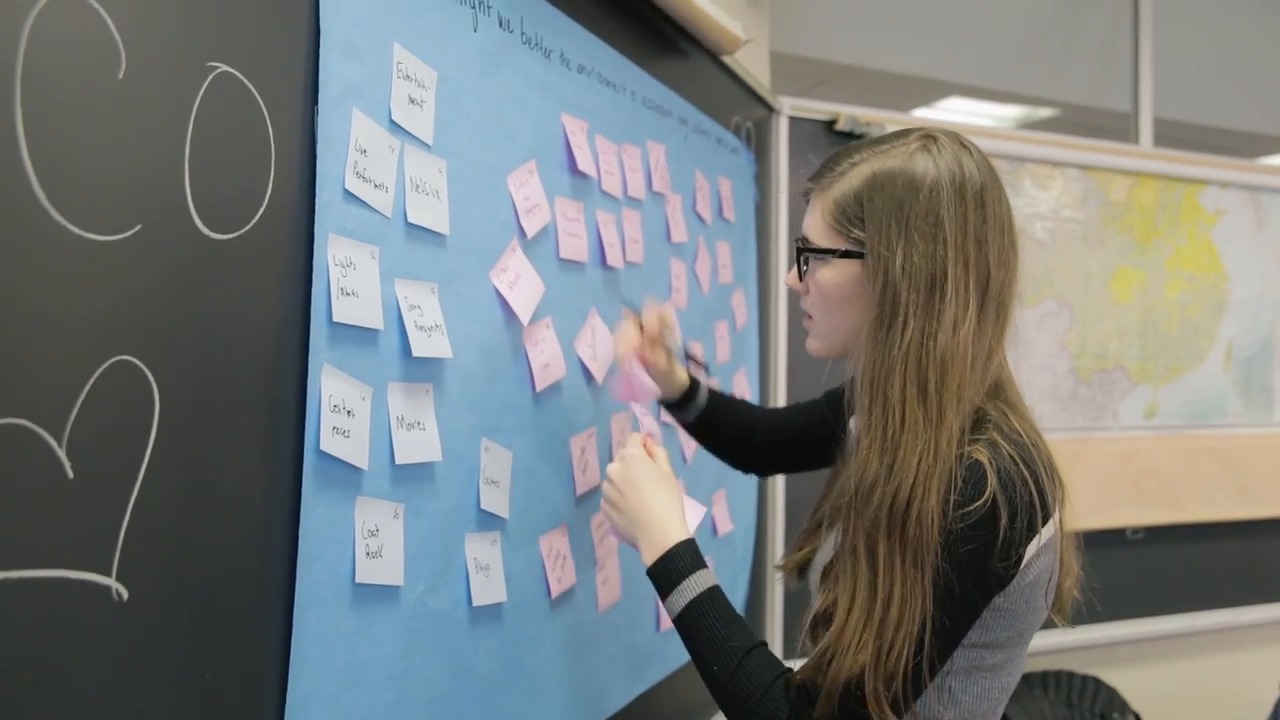 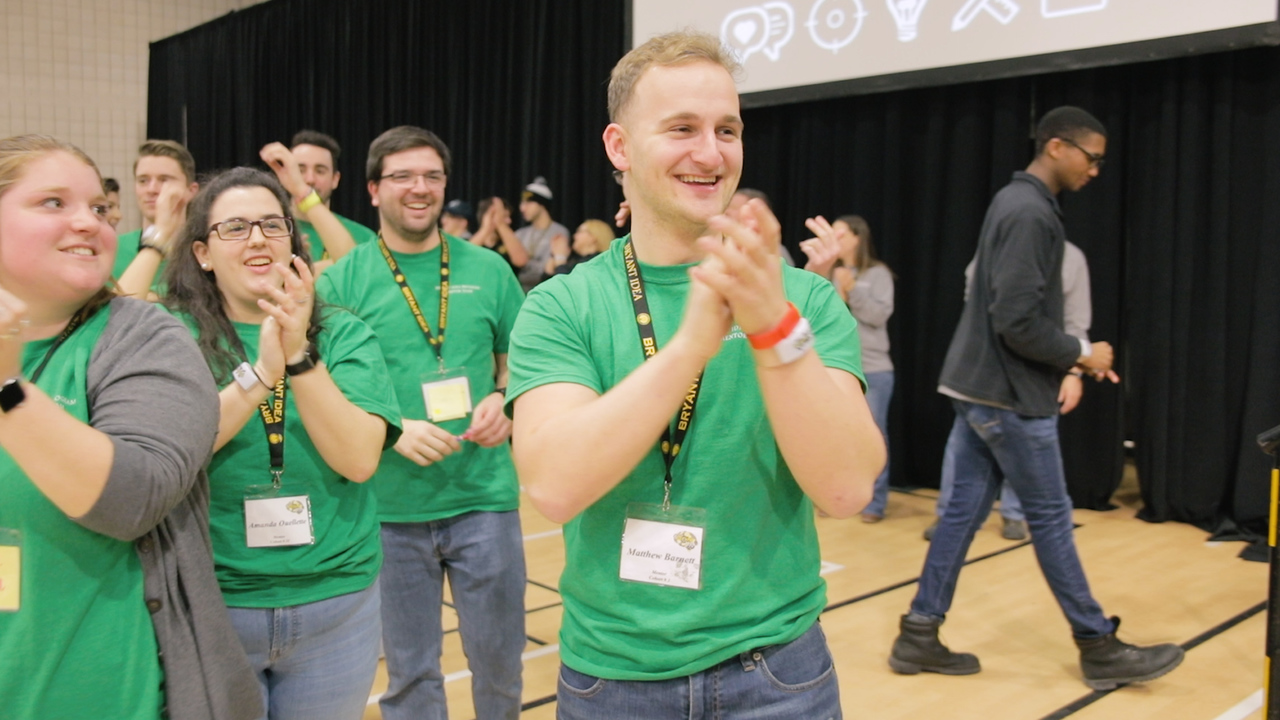 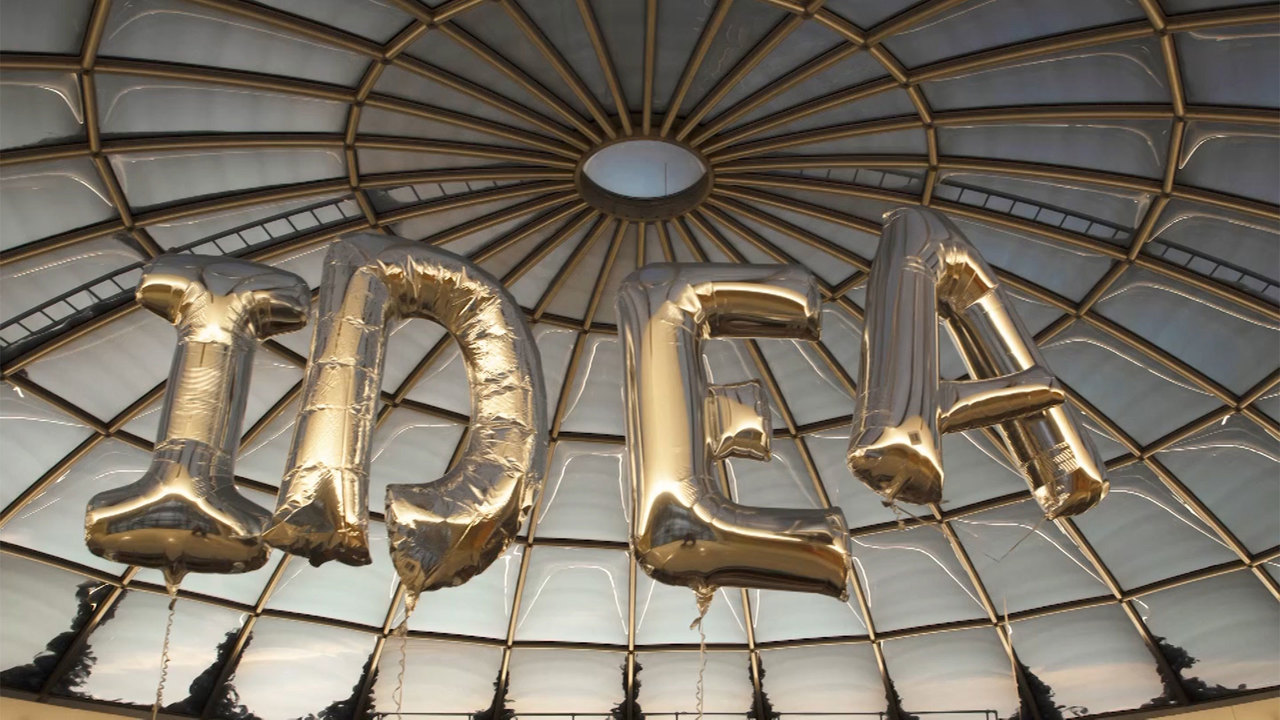