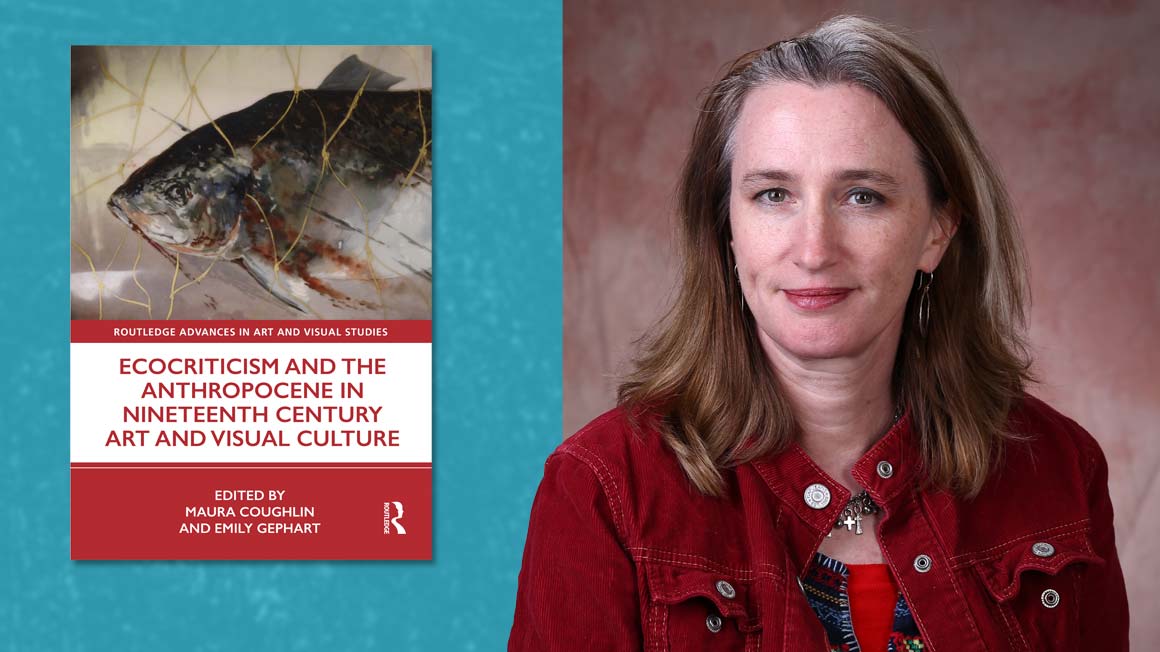 In a recent interview for Bryant’s Faculty Spotlight series, Maura Coughlin, Ph.D., Professor of Visual Studies, discussed her new, co-edited book, “Ecocriticism and the Anthropocene in Nineteenth-Century Art and Visual Culture.” Coughlin and co-editor Emily Gephart, Lecturer in the Department of Visual and Material Studies at Tufts University, examine the effect of humankind on the environment.

Published by Routledge, a multinational academic publisher, in September 2019, the collection is part of a series titled, “Advances in Art and Visual Studies,” which provides new insights into visual culture and art practice, theory, and research.

Together, Coughlin and Gephart bring ethical and political concerns for the environment to the study of 19th century visual culture.

“We realized that there was a real hole in the scholarship on 19th century art that specifically dealt with the environment,” said Coughlin in her interview, noting that most of the scholarship deals with the late 20th century and early 21st century.

“We are in a human-influenced era where our actions of extraction and exploitation of the environment have affected things on a planetary scale, and we see the roots of that in the 19th century.”

“We are in a human-influenced era where our actions of extraction and exploitation of the environment have affected things on a planetary scale, and we see the roots of that in the 19th century.”

The chapter authored by Coughlin, “Shifting Baselines, or Reading Art through Fish,” examines the depletion and conservation of natural resources. “The industrialization of fishing that added freezing to early conservation techniques such as drying, salting, or canning affected ocean ecosystems and the fishing populations that depended on the sea,” she writes.

In addition to the print publication, chapters from Coughlin and Gephart’s book will be packaged into an e-book with other similarly themed content, which can be assigned to students.

This summer, Coughlin will present some work from “Ecocriticism and the Anthropocene in Nineteenth-Century Art and Visual Culture” at the Association for the Study of Literature and the Environment (ASLE) conference at The University of California, Davis.

Coughlin will also speak in April at the St. Louis Art Museum's Symposium: François Millet and Artistic Radicalism. Coughlin wrote her dissertation on Millet and will present “We Do Not Live Apart: Millet, John Berger and the Radical Politics of Rural Life.”

In each episode of the Bryant Faculty Spotlight series – hosted by the Douglas and Judith Krupp Library and University Relations – outstanding Bryant University faculty discuss their recent projects and publications.