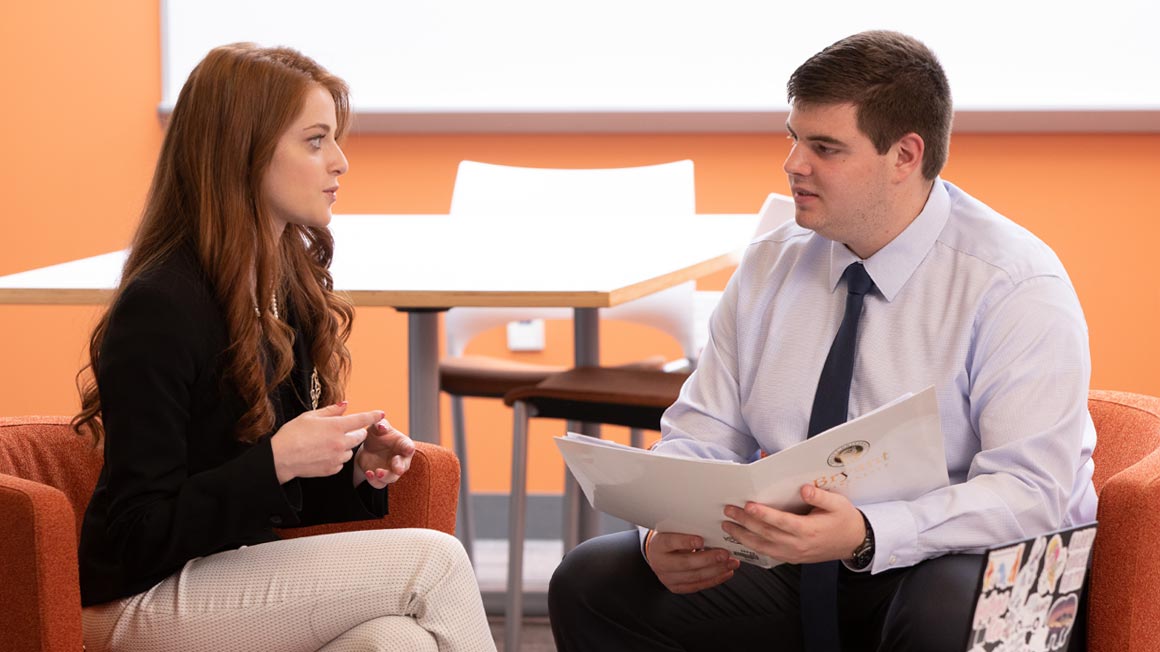 Internships can be critical to helping Bryant students determine their career paths, and even their programs of study. By providing real-world experiences, internships give students an important first taste of the professional world, help them determine what’s right for them, and give them an opportunity to apply their classroom learning in the real world. Internships can also give students a competitive edge when it comes time to apply for their first jobs after graduation.

Ryan Fryer ’19, who recently graduated with a BS in Actuarial Mathematics, says his internship at Gen Re in Connecticut gave him an opportunity to learn about the insurance industry, and to work with real-world data. He says he wrote a thousand lines of code to analyze a segment of the business with a single click.

Fryer, who will be joining Gen Re full time, says he also worked on two other projects – an analysis and an audit – and discovered opportunities to save the company several hundred thousand dollars.

“The one thing I’ll never forget is that feeling of accomplishment at the end of the summer, when my work was implemented to save the company large amounts of money,” he says.

Abby Sannizzaro ’20 spent the summer interning at Stanley Black & Decker in Connecticut. She says she enjoyed the projects she worked on, including clean sheet analyses that calculated where the company could gain the most savings if it changed the design of a product. She also worked on robotic process automation, learning programming to design bots to model process productivity and efficiency for the supply chain.

“The one thing I’ll never forget is that feeling of accomplishment at the end of the summer, when my work was implemented to save the company large amounts of money”

Sannizzaro says she especially appreciated her Bryant education when she and other interns from across the company collaborated on a company-wide challenge — analyzing a new market opportunity.

“We eventually presented to the CEO and a panel of executives,” Sannizzaro says. “That was definitely something I felt Bryant prepared me well for. I’m thankful for the fact that we present so often here, and do so many group projects.”

Though she enjoyed her internship, it helped her realize that supply chain wasn’t the best fit for her, so she switched her major to Human Resource Management last fall. She returned this summer to Stanley Black & Decker for a new internship in the human resources department, and will be working on some corporate social responsibility projects as well. As a veteran intern, she’ll also have a hand in running the internship program there.

Both Sannizzaro and Fryer agree that their internships let them sink their teeth into substantial projects that not only taught them new skills, but also benefited the companies they worked with, which they found rewarding. Each also had the opportunity to meet and work with other Bryant alumni at their respective organizations. Most valuable of all, their internships helped each of them get a step closer to their eventual career paths.