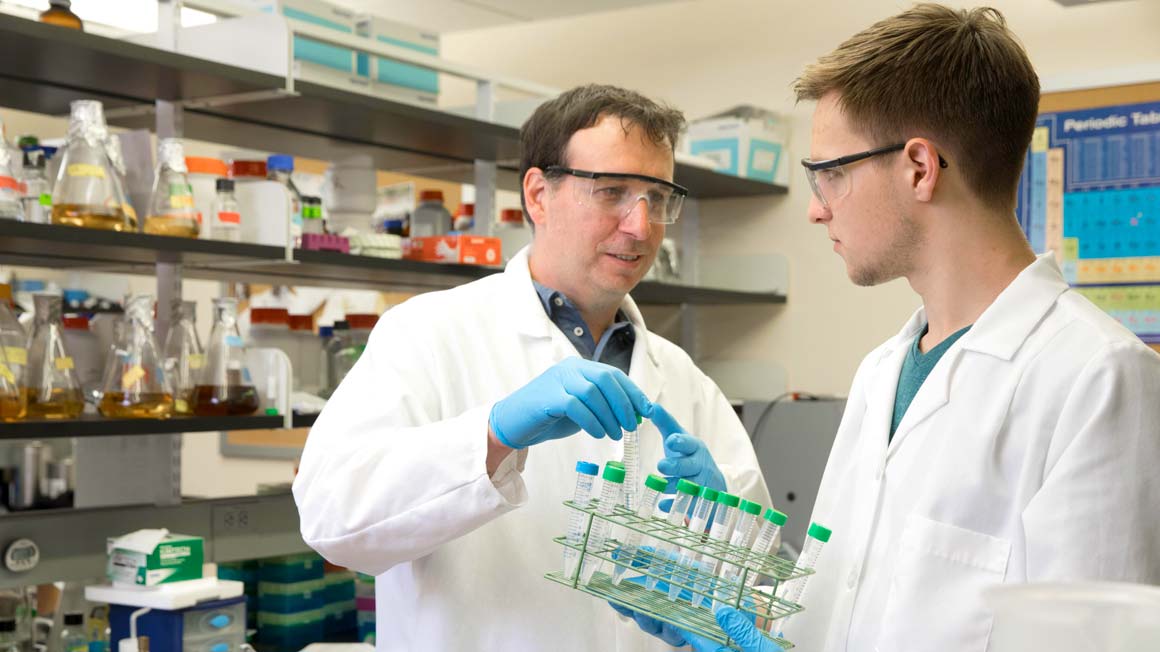 Student researchers Lauren Rochefort '19 and John Belval '20 shared their findings at the American Chemical Society's 256th National Meeting and Exposition, held in Boston, MA. One of the largest meetings of its kind in the country, the August conference drew more than 16,000 attendees from around the world and 11,000 papers and posters were presented on a variety of subjects across a range of fields.

“Being a part of an event like the ACS conference adds a huge amount of value to students’ educations,” says Associate Professor of Science and Technology Chris Reid, Ph.D., who runs the glycomics lab where both students work and attended the conference with them. “They’re getting experience and exposure that they wouldn’t be able to get from the regular curriculum.”

“The scope of the meeting was amazing,” confirms Belval, “It was impressive to see all of the different projects and the wide range of research being done.”

Sharing their work
At the conference, Rochefort gave a 20-minute talk about her Rhode Island Idea Network Of Biomedical Research Excellence-funded research into antibiotics as part of the conference’s Excellence in Undergraduate Glycoscience Symposium and presented a poster summarizing her work as well.

Though the prospect of presenting to, and answering questions from, experts in her field was initially intimidating, Reid helped Rochefort prepare throughout the summer. “We practiced a lot,” she says. “Dr. Reid would always remind me not to be afraid because the people there aren’t trying to trip you up. They want to help you and they want to learn themselves.”

Rochefort, a member of Sigma Xi, the scientific research honor society, has also presented at the annual Summer Undergraduate Research Fellowship conference, the second annual New England Glyco-Chemistry meeting, and a meeting of the American Society of Microbiology through her work in Professor Reid’s lab. “My presentations have definitely helped me become a better communicator and build my confidence,” she says.

Belval presented a poster on his RI-INBRE-funded work identifying inhibitors against the pathogen Streptococcus pneumoniae, which was named the best undergraduate poster in his section of carbohydrate chemistry.

“I was nervous at first,” he says, “but by the end of it I felt really confident presenting my work. The judges were looking to see not just how we explained our research, but the thought and processes that went into it as well.”

The ability to communicate your findings, he says, is an important part of research. “Everyone should be able to get across their ideas in a very basic way,” he says. “If you can’t explain your work to people outside your field, then you don’t know it as well as you think you do.”

Learning from others
The Bryant contingent also made a point of attending their peers’ presentations as well as those of leading experts like Professor Leroy Cronin, Ph.D., a chemist at the University of Glasgow; and representatives from NASA. “It’s so valuable to be exposed to such a wide breadth of knowledge and so many experts. It’s incredibly fulfilling to be able to learn about so many things,” says Belval.

“The conference is a great way for students to see what’s being done in labs around the world,” Reid notes.

Belval was inspired by a talk delivered by preeminent chemical engineer Robert Langer, ScD, who discussed his career in science. “It was really interesting to hear him talk about how he had grown as a scientist and tried and failed and eventually succeeded.”

The conference hosted a number of educational sessions, an Innovation Fair, and a career and graduate school fair. “Students get to meet faculty from a number of schools, including graduate directors and other high level administrators on a different level,” notes Reid.

“It was a great opportunity to meet and learn from so many different people and I think I made some valuable connections,” says Rochefort, a Biology and Psychology double major who is currently considering a number of post-graduate options.

Those connections, and the entire conference experience, provide an invaluable advantage. “The work the students have done in the lab carrying out experiments and presenting at conferences like ACS proves that they can do this, and that they have done it,” Reid says. “It moves them to the top of the pack for grad school, med school, or careers in industry.