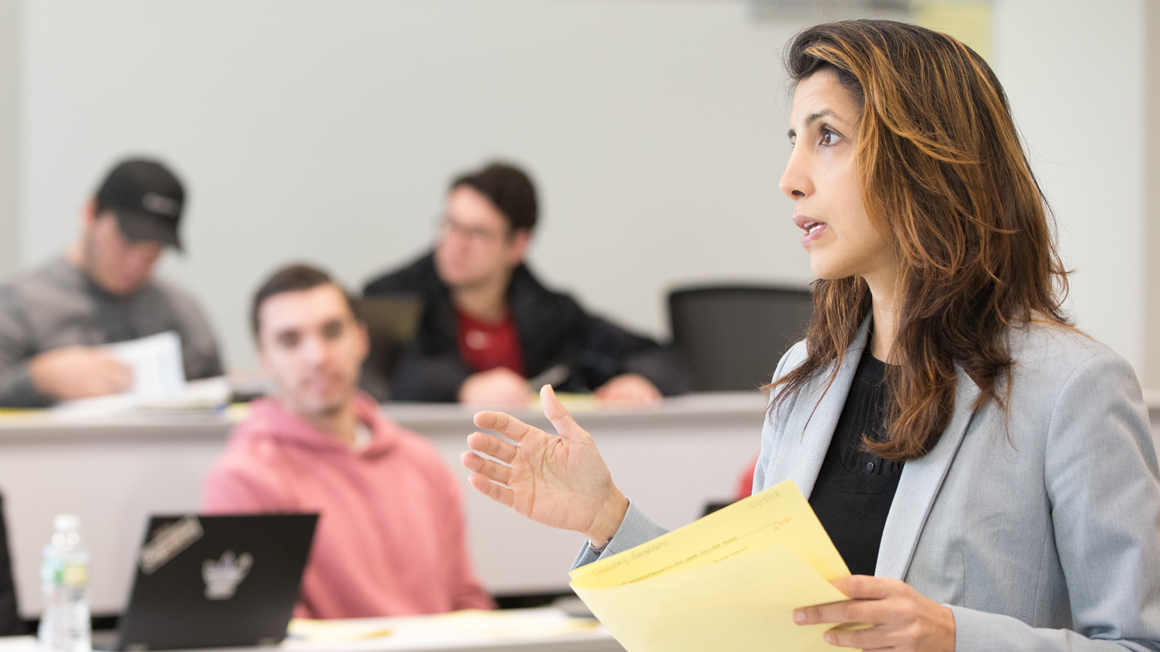 “I want my students to come away with the understanding that the law should be accessible and approached confidently," says Katayoun (Katie) Alidadi, Ph.D., Assistant Professor of Legal Studies. "I also think a global outlook is very important. ... This way, students can see developments in the U.S. not in a vacuum, but in a larger international and comparative perspective.”
Students and global influencers benefit from Alidadi's perspective on religion and law
Jan 11, 2019, by Staff Writer

The intersections of law and religion in society continue to spark discussion, dissent and conflict in the U.S. and abroad. Bryant’s Katayoun (Katie) Alidadi, Ph.D., Assistant Professor of Legal Studies, is an expert on human rights, anti-discrimination law, and labor law. She just completed a busy fall semester where she helped move the conversation on law and religion ahead, the result of years of research. All the while, as a dedicated and passionate professor, she used her critical and global perspective to enrich student learning.

In her research, Alidadi has argued that the most effective way for Europe to manage religious diversity in the workplace is to adopt an explicit right to reasonable accommodation of religion or belief for employees. Such right exists in the United States (though some argue it has been diluted considerably) and in a select number of other countries. This right entails that an employer will accommodate an employee who declares a conflict between their religious beliefs and work duties. (Examples of “reasonable accommodation” include making exceptions to the dress code so a headscarf can be worn or letting employees work shifts outside of religious holidays.)

She makes this argument in her book "Religion, Equality, and Employment in Europe: The Case for Reasonable Accommodation" (Hart, 2017), which last fall received an honorable mention for the 2018 Canada Prize from the International Academy of Comparative Law, known to be the top organization for the field. Comparative law is the practice of comparing laws or legal systems, useful for critiquing law—an approach she uses in her research and in the book.

Alidadi’s argument is based on years of comparative and collaborative research in the field of law and religion. From 2010 to 2013 she was a lead researcher of RELIGARE (Religious Diversity and Secular Models in Europe – Innovative Approaches to Law and Policy), a comparative research project funded by the European Commission investigating the impact of religious diversity on the labor market across 10 European countries. As a co-author of the project’s final report to the European Commission, she laid out evidence and support for the research team’s recommendation for an explicit right to reasonable accommodation for managing diversity in Europe – ideas that later, in addition to forming the basis of her 2017 book, would garner her an invitation to speak at the 2018 G20 Interfaith Forum that was held in September In Buenos Aires.

Offering a critical and global perspective

An annual event held in advance of the G20 Summit, the G20 Interfaith Forum is an independent meeting of interfaith leaders, organizations, religious leaders, academics, and non-profits seeking to lend a moral voice and policy recommendations to the G20 Summit proceedings. At the G20 Summit, powerful countries discuss economic policies, often making decisions with global ramifications. With the 2018 G20 Summit’s dialogue on the future of work looming, Alidadi spoke at the 2018 Interfaith Forum on the importance of reasonable accommodation in the future of work, and how artificial intelligence may affect employee rights and ultimately human rights, including if workers are deprived of access to jobs, and the dignity work provides — dignity being a core prize preserved by human rights.

All the while, she used her critical and global perspective to enrich student learning. Says Alidadi, “I want my students to come away with the understanding that the law should be accessible and approached confidently. I also think a global outlook is very important. In all of my classes, I include the perspectives of various jurisdictions. This way, students can see developments in the U.S. not in a vacuum, but in a larger international and comparative perspective.”

She also embraces the role of being a mentor for her students. “I introduce myself and I tell them about my background, and I welcome students’ questions. Because I believe you're not just there to teach them the knowledge in a certain area. You're there to engage them. You're there to inspire them. That's the highest, I think, you can aim for.”

And she’s welcomed an opportunity to do so at Bryant, in part because of the perspectives she’s gleaned from others. “Here we have students and faculty from all over the world. I feel like this is a very special international community. And I'm glad to be even just a small part of that.”