SMITHFIELD, RI – Bryant University President Ronald K. Machtley, in his 23rd year at Bryant, has announced that the University’s capital campaign, Expanding the World of Opportunity: The Campaign for Bryant’s Bold Future, has exceeded its original goal of $75 million and now surpassed an increased stretch goal of $100 million with several months still to go.

“We had a vision that this capital campaign would inspire unprecedented levels of support and provide extraordinary resources to allow us to redefine Bryant’s future and set a new pace for others to follow." - Bryant President Ronald K. Machtley

“When we launched this historic capital campaign, the entire Bryant community shared ambitious goals and the conviction that this campaign would be the catalyst to take Bryant to the next level of excellence,” Machtley said. “We had a vision that this capital campaign would inspire unprecedented levels of support and provide extraordinary resources to allow us to redefine Bryant’s future and set a new pace for others to follow. I am pleased to announce that we have now raised more than $100 million and our bold vision is being realized.” 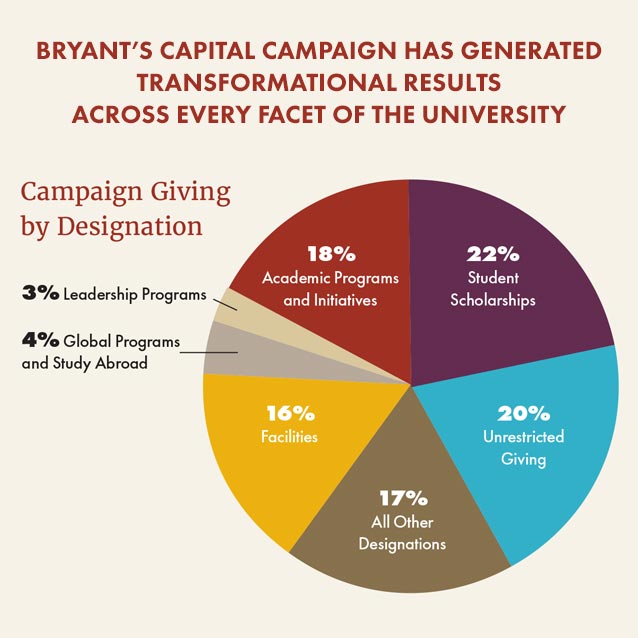 Recent investments in Bryant’s capital campaign include a $7.5M pledge from an anonymous Bryant alumnus, representing the largest single commitment ever received from an individual in Bryant history, which is among five commitments of $5M or more to the campaign. Building on Bryant’s strategic expansion of academic programs in Data Science, one of the nation’s fastest growing fields, the University is also pleased to announce the John ‘01H and Jeanne Rowe Professor of Data Science position. It was a recent commitment of $1M from President Machtley and his wife, Kati C. Machtley, director of the Bryant University Women’s Summit, which pushed Bryant past its $100 million goal.

“This capital campaign, only the second comprehensive campaign in Bryant’s 155-year history, has been record-breaking for the University."

According to William J. Conaty ’67, Chair of the Bryant University Board of Trustees and with Michael E. Fisher ’67 co-chair of Bryant’s capital campaign, “This capital campaign, only the second comprehensive campaign in Bryant’s 155-year history, has been record-breaking for the University. Our community has really stepped up to the plate, and in the last year alone Bryant set a new record by raising more than $18 million in gifts and pledges to the school. So far, more than 22,000 donors- including trustees, alumni, parents, faculty, staff, students, friends, and corporations and foundations- have united in support of Bryant’s future. That is simply amazing for the Bryant family.”

Across every facet of the school, Bryant’s capital campaign has already generated transformational results: 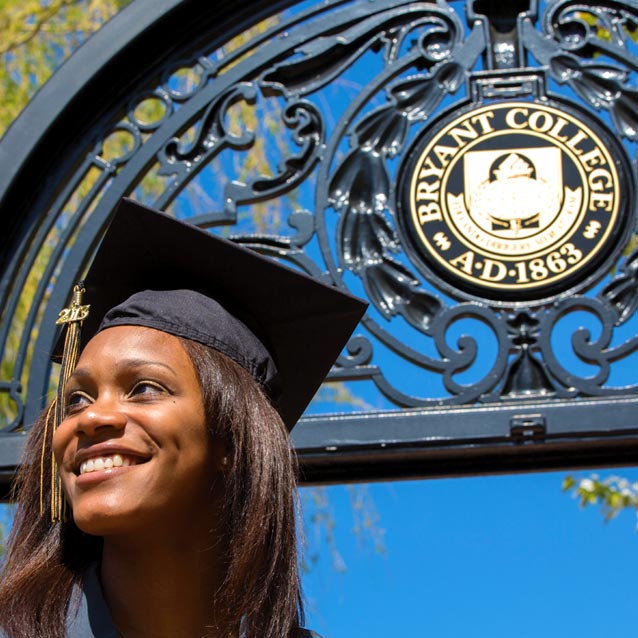 - The impact of $21.5 million in new scholarships has helped to put a Bryant education within reach of those students who will benefit from it the most. More than 100 new annual and endowed scholarship funds have been established, including a fund made possible by a recent gift from the estate of former Bryant College President Emeritus Dr. William T. O’Hara and his wife Bobbi. Applications to Bryant’s entering class of September 2019 are at an all-time high and represent talented and high-achieving students from across the country and around the world. 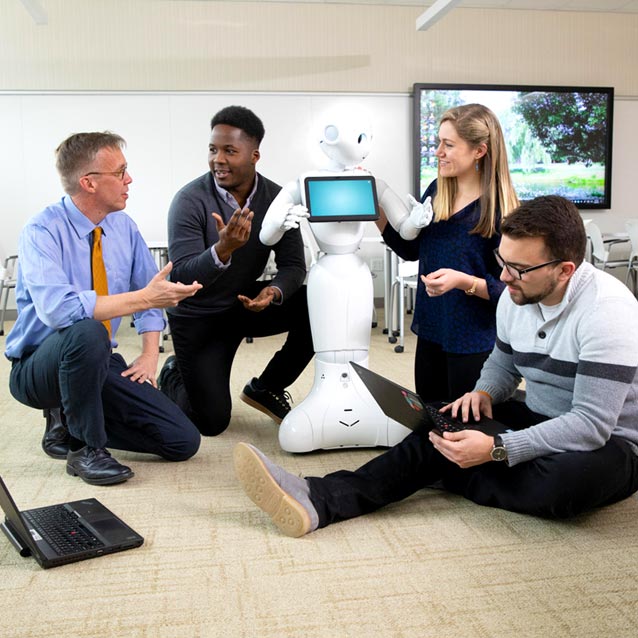 - Flexible, unrestricted gifts to the Bryant Fund totaling $20 million have gone to areas where they are needed most, with an emphasis on support for many academic initiatives including: new Academic Excellence funds provided to the Deans of both the College of Business and the College of Arts and Sciences; the first-year Gateway Experience and Innovation and Design Experience for All (IDEA); technology enhancements including 3D printers and robots; spaces including a new studio arts class room; travel opportunities for students in the Bryant Honors program; resources for the Professional MBA graduate school online initiative; support for new classes including Fixed Income and Digital Marketing courses; faculty development and innovation resources; and executives-in-residence and visiting keynote speakers. 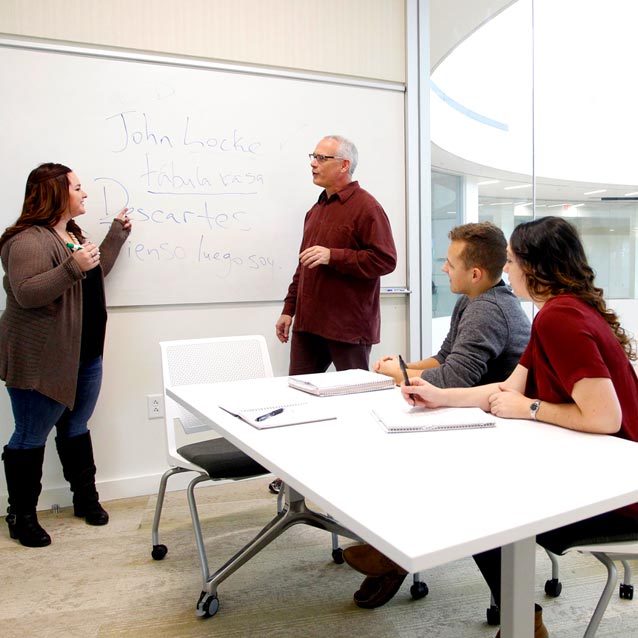 - Contributions of nearly $18 million for Bryant’s nationally recognized academic programs and learning environment include a $2.5M matching gift from the Warren Alpert Foundation resulting in $5M raised toward the School of Health Sciences; more than $1M to create an Accounting Innovation Fund; $.5M for initiatives within the International Business and Global Supply Chain Management programs; and gifts from The Champlin Foundation and others to support state-of-the-art teaching and learning spaces and tools including a new data visualization lab, an enlarged lab for Psychology, expansion of the TV studio, and Bloomberg terminals; in addition to the commitment of $1M from John and Jeanne Rowe to underwrite a new endowed Professor of Data Science position. 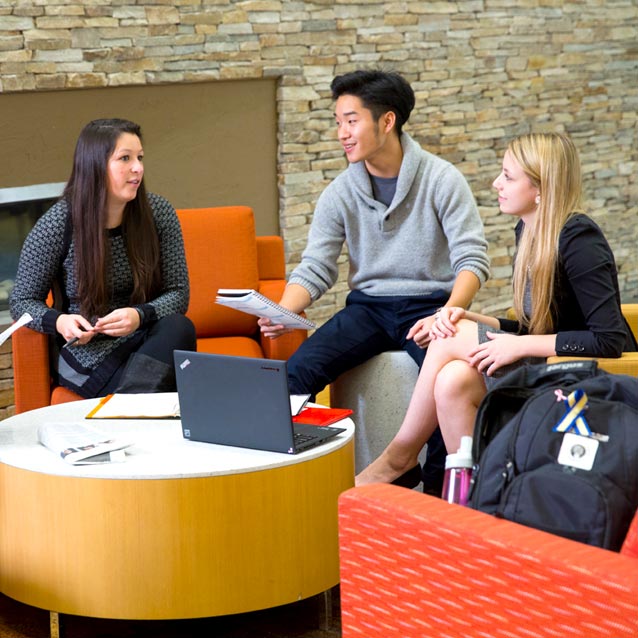 - $15.5 million in gifts for facilities has allowed the addition of more than 217,000 sq. ft. of award-winning new and enhanced spaces. Under the leadership of Bryant President Ronald K. Machtley, during the capital campaign the University launched Bryant Builds, the largest and most transformative facilities initiative since Bryant’s move from Providence to Smithfield 48 years ago. Projects completed include the 48,000 sq. ft. Quinlan/Brown Academic Innovation Center, an entirely new kind of facility for teaching and learning, and the Janikies Family Innovation Forum, which have galvanized Bryant’s commitment to academic excellence and innovation. The completely re-imagined Michael E. ’67 and Karen L. Fisher Student Center has created a welcoming three-story, 56,000 sq. ft. campus “living room” that enhances Bryant’s distinctive residential experience. Bryant’s new School of Health Sciences is based in the 11,000 sq. ft. Physician Assistant Learning Center, a contemporary wing added to the University’s landmark Unistructure. The David M. ’85 and Terry Beirne Stadium Complex, including the 4,400-seat Bulldog Stadium and 10,000 sq. ft. Bulldog Strength & Conditioning Center; adjacent state-of-the-art turf field and lighting; the Conaty Park baseball and softball complex; the 80,000 sq. ft. Conaty Indoor Athletic Center, the largest facility of its kind in New England; and a new Sports Medicine and Training Center within the Elizabeth and Malcolm Chace Wellness and Athletic Center provide Bryant’s student-athletes with an environment that inspires them to succeed at the highest level of collegiate athletics. 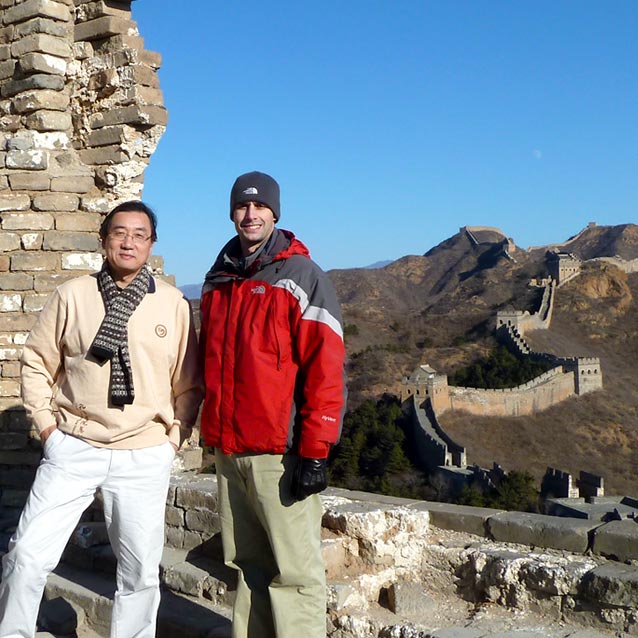 - Expanded resources of $3.4M for Bryant global initiatives, including funds to support Bryant’s  Sophomore International Experience and other study abroad opportunities; and funds to support academic, business, and cultural partnerships between Bryant University and higher learning institutions and cultural organizations in China.

- Charitable contributions that support Bryant’s mission as a leader in education, including $2.7M in commitments from former trustee Alan Hassenfeld ‘ 85H for the Hassenfeld Institute for Public Leadership.

- Nearly $2.2M raised for enriched student life and learning opportunities, including gifts of $1.3M from PwC to support diversity initiatives and the Accounting Careers Leadership Program; key contributions toward Campus Ministry programs including the Hillel program and Jewish life, Christian Campus Ministry, and the Catholic Students Program Fund; funds to expand the programs of Bryant’s Amica Center for Career Education; and establishment of the Richard and Bonnie Leto Nutrition and Health Education Endowed Fund.

“At more than $100 million, this capital campaign has already far exceeded our original $75 million goal and will continue through September 2019,” Chairman Conaty noted. “Recent gifts including the Machtleys’ and our record alumnus pledge have raised the bar for others to continue this campaign’s tremendous momentum.”

Bryant plans to celebrate the successful conclusion of the capital campaign during its annual Reunion@Homecoming weekend, held September 27-28, 2019.

Bryant University in Smithfield, R.I., is a leading private university offering an innovative and uniquely integrated business and liberal arts education. The University's 3,700 undergraduate and postgraduate students study in an intensive and immersive learning environment that has been purpose-built for high achievement. Bryant’s groundbreaking academic programs have been nationally recognized by organizations including the Davis Educational Foundation and Hanover Research. Founded in 1863, Bryant is recognized as a leader in international education and regularly receives top rankings from U.S. News and World Report, College Factual/U.S.A. Today, Bloomberg Businessweek, Forbes, and Barron’s. Visit www.bryant.edu to learn more.