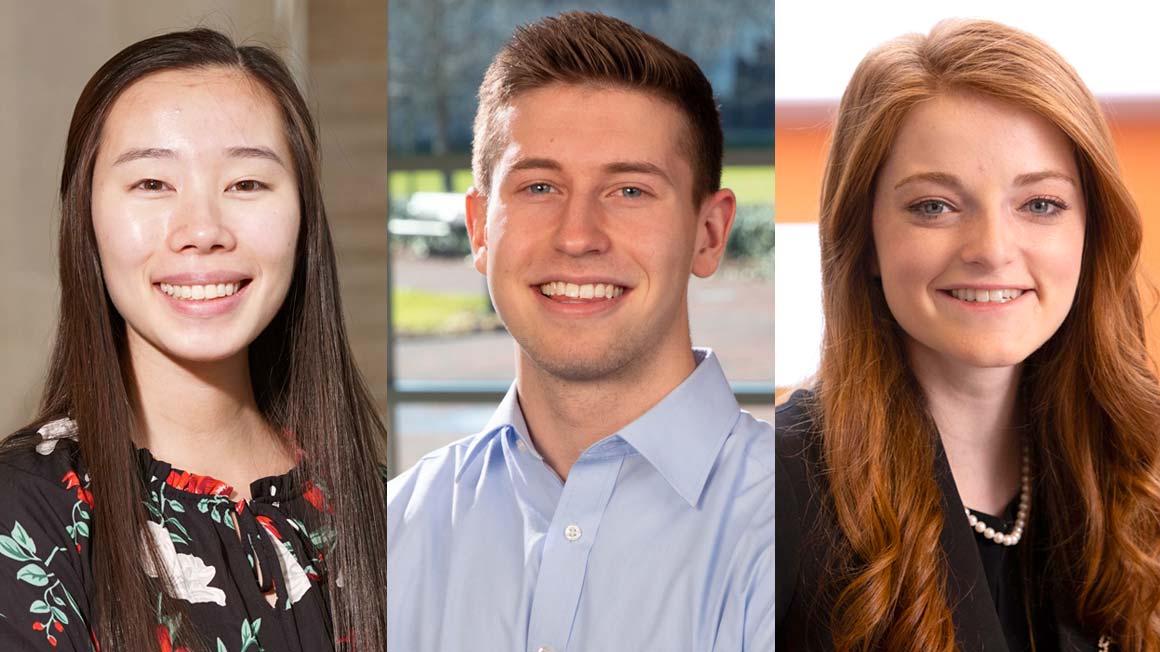 Constance Tang ’20 an Actuarial Mathematics major, will be starting her career as an actuarial analyst with the health consulting group Milliman after graduation – an opportunity she’s excited to begin. “With consulting, I get to dive into all sorts of new and different areas all at once and use what I’ve learned to help people in all sorts of different situations,” she says. “Bryant has prepared me really well for that.”

She’s not alone. Inspired, confident, and prepared, members of Bryant’s Class of 2020 are already demonstrating they have the skills, experience, and qualities of character necessary to thrive in the competitive job market.

Tang chose Bryant because of the personalized education she knew she’d receive. “I think it was the close-knit community that made it feel like such a good fit,” says Tang, who has fostered close relationships with mentors such as Professors of Mathematics Richard Smith and Kristen Kennedy. “I knew I wouldn’t just be another face in the crowd and that my professors would actually know my name.”

She also valued the University’s strong actuarial program. An Information Services and Analytics course, in which she analyzed large data sets provided by Fidelity, helped introduce her to the field and prepare her for her career. "That was my first time working with data. It was a really good learning experience,” she remembers.

“I was really glad that I went to Bryant because I was able to use the data science skills I learned from with my major as well as the business background.”

It also helped her stand out when applying for positions, says Tang, who chose to work at Milliman over three other competing organizations. "In every single interview I've had in this field, they've asked me to talk about how you've worked with data,” she says. “So the fact that I can point to a project I worked on with a real company, I think, impressed a lot of employers.”

Milliman also asked her about her leadership experience and about her ability to work on a team – which would be vital in a consulting role. “Bryant definitely teaches us the importance of teamwork, whether it's for presentations, or papers, or even just the organizations we’re part of,” notes Tang, who is a tutor, a resident assistant, and president of the University’s actuarial association.  “In the working world, no matter what job you have, you're going to be on a team.”

Ahead of the pack

Fascinated by cutting-edge analytics from an early age, it’s important for Jeffrey Moise ’20, an incoming member of United Technologies Digital Technology Leadership Program, to be ahead of the curve. That’s why he chose to major in Data Science.

“I think Bryant is really ahead of the times with its undergraduate program for Data Science,” says Moise, COO of Bryant’s Data Science Association. “When I was applying for internships, there were a lot of places that were surprised I was even able to study Data Science as an undergrad.”

"I knew that I wanted to begin my career search early when I got to Bryant, and the Amica Center has the resources to help you get wherever you want to go."

Classes such as Database Management with Kenneth Sousa, Ph.D., Associate Professor of Information Systems and Analytics, helped Moise prepared him for success. “Professor Sousa expects a lot out of his students,” he says. ”He doesn’t just want you to learn the lessons, he wants you to understand them, and why they’re important.”

As part of the interview process for his position at United Technologies, Moise had to work on a case study involving a business situation that tested both his strategic skills and business knowledge. He found that the classes he had taken in other disciplines such as Global Supply Chain Management gave him a broader understanding of his field as well as transferrable skills. “That was when I was really glad that I went to Bryant,” he remembers, “because I was able to use the data science skills I learned from with my major as well as the business background.”

That range of courses had other benefits as well. “You need to take your time figuring out what your passion is and what you want to do for the rest of your life.” says Moise, who explored different academic paths before deciding on Data Science. “In a few months I’ll be starting a great job that I’m really looking forward to,” he says. “I think that’s because I was chasing my passion first.”

“The best decision I have ever made”

“I chose to study Human Resource Management because it lets me bring together businesses and people,” says Abigail Sannizzaro ’20, who will be starting as an HR Generalist at Stanley Black & Decker after graduation. “And I wanted a career where I can help others.”

Bryant’s Amica Center for Career Education aided her in discovering a path to make that happen. The Amica Center’s Assistant Director of Career Services Pat Miernicki helped her find the internship that would lead to her new position. An Amica-sponsored career fair introduced her to some of the company’s representatives and helped her land an interview.

“It's really helpful to have that one-on-one experience with the Amica staff,” says Sannizzaro. “I knew that I wanted to begin my career search early when I got to Bryant, and the Amica Center has the resources to help you get wherever you want to go.”

“I would say choosing Bryant was the best decision I have ever made. It's helped me become a strong young woman ready to enter the career world, and I'm really happy and excited to be where I am today.

In her Operations Management course with Christopher Roethlein, Ph.D., she learned managerial theories and analytical techniques that strengthened both her critical thinking and problem solving skills – traits her employer was looking for. “Professor Rothlein incorporated real examples and life lessons into the material, and showed us how what we were learning could make an impact on real life,” Sannizzaro says.

Her experiences with social entrepreneurship, including helping to organize a Social Change Marketplace that brought together local social enterprises that create a positive social impact, helped her standout in interviews. “Opportunities like the Marketplace helped me bring together everything I cared about,” she says.

“I would say choosing Bryant was the best decision I have ever made,” says Sanizzarro. “It's helped me become a strong young woman ready to enter the career world, and I'm really happy and excited to be where I am today.