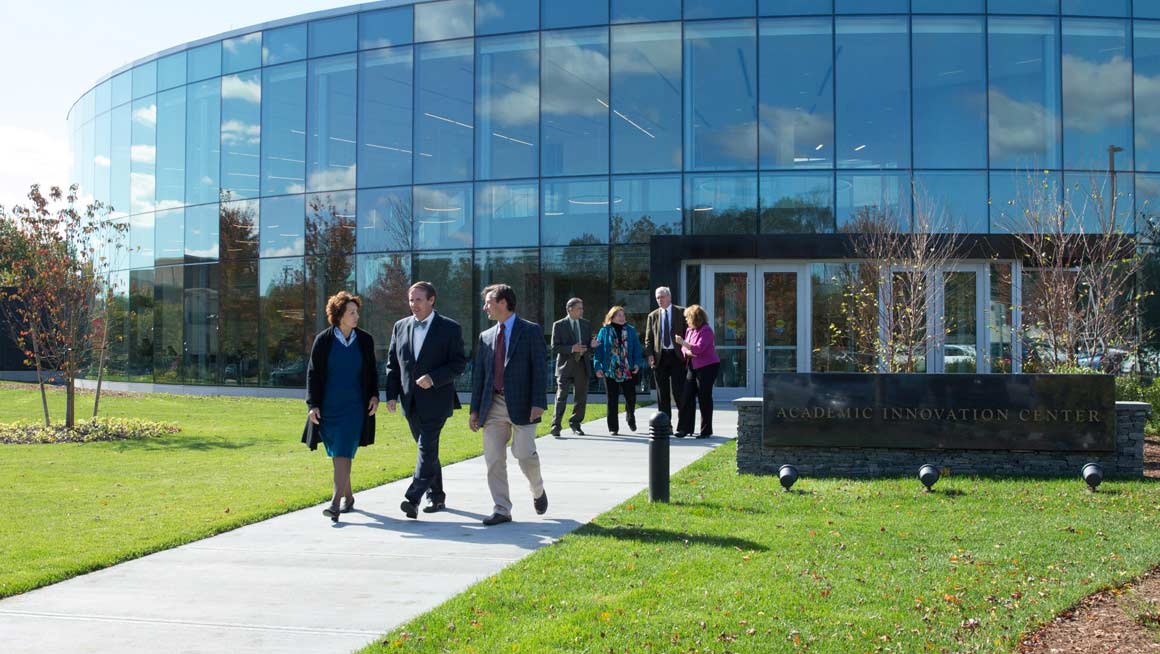 Thirteen new faculty members will help advance teaching innovation across the university.
Provost announces new Dean and new faculty from top institutions around the world
May 25, 2018, by Staff Writer

Bryant Provost and Chief Academic Officer Glenn Sulmasy has announced the appointment of a new dean for the College of Arts and Sciences, and the arrival of 13 new faculty members to Bryant's community of scholars.

Dean, College of Arts and Sciences

Bradford Martin, Ph.D., has been appointed dean of the College of Arts and Sciences, effective September 1. Martin joined the Bryant faculty in 1999 and was appointed Associate Dean in January 2015. He has served as interim dean since January 2017, and will now succeed Wendy Samter, Ph.D., who will move into the position of associate dean. As dean, Samter presided over successful curriculum development and the creation of a new staffing model. She has been a tireless advocate of the arts and sciences at Bryant since her arrival as professor of Communication in 2003.

"This realignment of roles allows the College of Arts and Sciences to keep together a very effective and successful team, while also addressing the need to balance personal and professional goals," Sulmasy said.

Prior to his role as associate dean, Martin served as History curriculum coordinator and program coordinator within the Department of History and Social Sciences from 2004 to 2015. He is the author of "The Other Eighties: A Secret History of America in the Age of Reagan" (2011) and "The Theater Is in the Street: Politics and Public Performance in Sixties America" (2004). Martin earned his Ph.D. in American Studies at Boston University and an M.A. in American Studies at University of Massachusetts Boston. He graduated with B.A. in History from Yale University.

Bryant continues to attract accomplished faculty who have worked and studied at top institutions around the world, and who are energized by the opportunity to contribute to Bryant's mission to reimagine higher education for the new century.

"We are pleased to welcome the new faculty members who are joining Bryant's forward looking academic organization," said Sulmasy. "They are committed to advancing teaching innovation in their respective disciplines, and to finding synergies across the University that will enable students to become innovative leaders for the future."

The following faculty members have joined Bryant's College of Business and the College of Arts and Sciences:

Katayoun Alidadi, assistant professor of Legal studies, holds a Ph.D. in law from KU Leuven in Belgium, which was recently named the "Most innovative University in Europe" by Reuters for the second straight year. Alidadi earned an L.L.M from Harvard Law School in Cambridge, and she is a Research Associate at the Max Planck Institute for Social Anthropology in Halle, Germany. Her work focuses on human rights, conflict of laws, employment law and the intersections of law and religion. Alidadi was awarded the 2013 Ius Commune Prize for her research on reasonable accommodation for religion and belief.

Alicia Lamere, assistant professor of Mathematics, received her Ph.D. in Applied and Computational Mathematics and Statistics from the University of Notre Dame, where she was also a Schmitt Fellow. She received her B.A. from Hamilton College, with degrees in Mathematics and Studio Art. Lamere's research is concerned with developing statistical methods for analyzing RNA-sequencing data, with a primary focus on new network estimation tools for non-Gaussian data.

Gao Niu, assistant professor of Mathematics, previously served as assistant director of the Goldenson Center of Actuarial Research at University of Connecticut. He completed his undergraduate work at Iowa Wesleyan College, earned his Master of Science at Western Illinois University, and he holds a Ph.D. from University of Connecticut. He is an Associate of the Casualty Society of Actuaries (ACAS) and a member of the American Academy of Actuaries (MAAA).

Ying "Cathy" Zheng, assistant professor of Finance, is a Chartered Financial Analyst (CFA) with a Ph.D. in International Finance from University of South Carolina. Her research focuses on financial practices in a global context, incorporating corporate social responsibility, debt contracting, creditor rights, and social values. Dr. Zheng has been nominated for the best paper award at the 2017 International Corporate Governance Society (ICGS) Conference, and has presented at numerous academic conferences including the Financial Management Academy (FMA), Academy of International Business (AIB), Asian Finance Association (AsianFA), and the Eastern Finance Association (EFA). She received an M.S. from Bentley University and completed her undergraduate work at East China University of Science and Technology.

Ilisabeth (Liz) Bornstein, lecturer of Legal Studies in History/Social Sciences and Pre-Law advisor, earned her J.D. and M.P.P. at the University of Chicago, and her B.A. at Yale University. Bornstein served as a Senior Clinical Fellow at the WilmerHale Legal Services Center of Harvard Law School, and currently runs a private law practice. She has represented clients and supervised law students in the practice of real estate, business and nonprofit formation and dissolution, and contracts. She previously taught at Providence College.

Jennifer Horan, lecturer in English/Cultural Studies, has a Ph.D. in Comparative Literature from the Graduate Center at City University of New York (CUNY) and Paris-Sorbonne University, and a B.A. from Boston College. Before joining the faculty at Bryant, she taught at RISD and Salve Regina. She loves teaching at Bryant for its commitment to pedagogies that aim to bridge disciplines. Her research interests are British and European Romanticism, Contemporary Poetry, Culture and Aesthetics of Literary Form, Poetic Inventions, and Multiple Arts.

Dr. T. V. (Jay) Jayaraman, lecturer in Management and Marketing, is a business professional with several decades of experience in new product research and development, product management, marketing, and global business. His expertise is in the development and implementation of strategies in Business development and Marketing on a global basis. For more than 10 years, he owned and operated a consulting company advising client companies on global business strategy. He has a Ph.D. in Polymer Science from the Indian Institute of Science, Bangalore, India and an M.B.A. from Bryant University.

Yuri V. Kondratiev, lecturer, Modern Languages, earned his Ph.D. in French Studies at Brown University in 2014. His research interests include early modern French literature and culture, Rabelais, Montaigne, interdisciplinary approaches to French Studies, history of science and medicine, aesthetics, the body, emotion and affect, architecture, critical theory, history of the French language, and French Canadian literature and cinema. Kondratiev received his M.A. at Tulane University and his B.A. at Berea College in Kentucky.

Jiayan Li, visiting lecturer in Accounting for the 2017-18 academic year, and is a Ph.D. candidate (A.B.D.) at University of Massachusetts at Lowell. She will defend her dissertation, "Social Capital and Managerial Decision on Financial Reporting and Risk Taking" in Fall 2017. She received her B.A. in Accounting at Shantou University, Shantou, Guangdong, China.

Christine McAuliffe, lecturer, Applied Psychology, has a dual Ph.D. and M.A. in Clinical Child and Clinical Community Psychology from Bowling Green State University and a B.S. from St. Lawrence University. Her interests are focused on the needs of children, adolescents, young adults, parents and families utilizing a community-based, multi-systemic perspective.

Matthew Neill Null, visiting writer/lecturer, English & Cultural Studies, is the author of the novel "Honey from the Lion" and the story collection "Allegheny Front." He is the recipient of the O. Henry Award, the Mary McCarthy Prize in Short Fiction, a Fine Arts Work Center Fellowship, and, from the American Academy of Arts & Letters, the Joseph Brodsky Rome Prize Fellowship in Literature. Translations of his books will soon be published in Italy and France. Null earned his M.F.A at the University of Iowa and his B.A. at Washington and Lee University in Lexington City, VA.

Robert L. Reinauer, Lecturer, Economics, is an economist and Ph.D. candidate (A.B.D.) at University of Massachusetts, specializing in macroeconomics, economic development, gender and development, Latin American studies, and political economy. As a researcher, Reinauer worked for two years in Guatemala focusing on the correlation between female financial decision-making and children's well-being. His current research interests include urban economics and methods for defining and measuring a global living wage. Reinauer earned his B.A. in economics at University of New Hampshire, and his previous teaching experience includes Rollins College in the College of the Holy Cross.