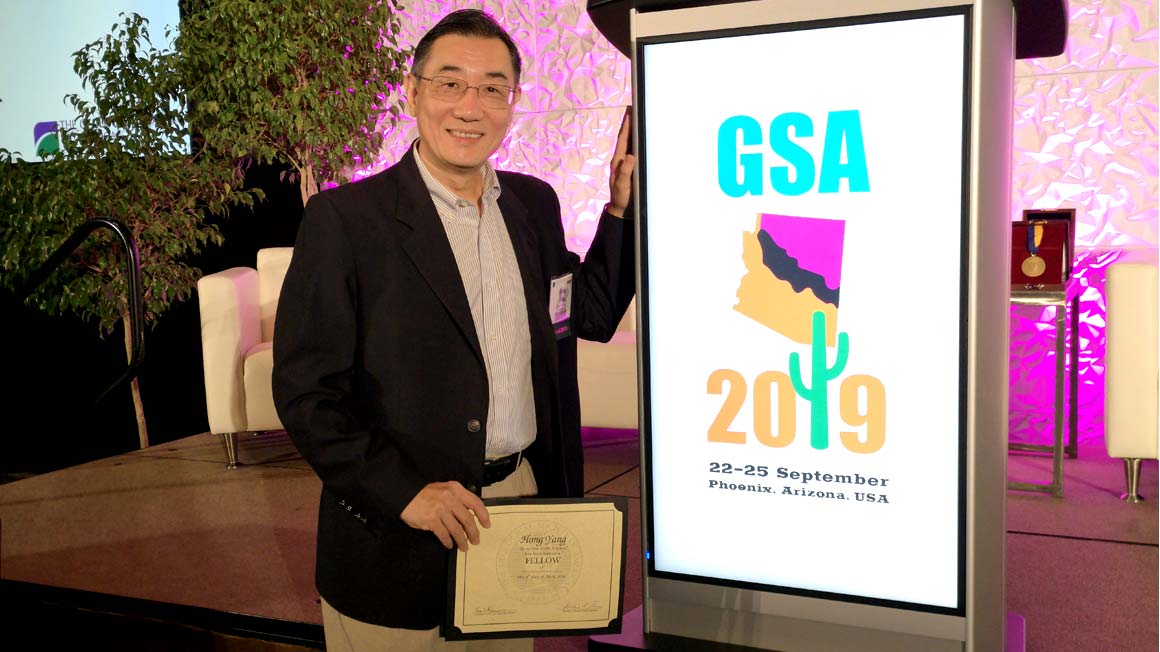 SMITHFIELD, RI – Hong Yang, Ph.D., Dr. Charles J. Smiley Chair, Professor of Science and Technology, and Vice President for International Affairs, was elected as a 2019 Fellow of the Geological Society of America and was recognized at the organization’s annual meeting Sept. 22 to 27, 2019, in Phoenix, AZ.

The Geological Society of America (GSA) is a global professional society with a membership of more than 20,000 individuals in more than 100 countries from all sectors—academic, government, business, and industry—who work to advance geoscience research and discovery, service to society, stewardship of Earth, and the geosciences profession.

Each year, new society fellows are nominated by current fellows in recognition of distinguished and sustained contributions to the geosciences and GSA including publications, applied research, teaching, program administration, leadership, and enhancing public awareness of geology.

“Most of my scientific accomplishments cited by the nominators were achieved during my past 20 years at Bryant, along with many Bryant colleagues, students, and alumni to whom I owe my thanks and appreciation."

Professor Yang was nominated by Derek Briggs, Ph.D., Professor of Geology & Geophysics, Yale University; and Yang Wang, Ph.D, Professor, Department of Earth, Ocean, & Atmospheric Science, Florida State University. In nominating Professor Yang, they noted "his creative contribution to understanding the evolution of terrestrial ecosystems, for his outstanding accomplishments in developing and using molecular and isotopic proxies to investigate the impacts of past climate changes on terrestrial plant communities, and for his extraordinary commitment to training of young scientists.”

“I am truly honored to be recognized as a Fellow of the Geological Society of America. More than ever, I am committed to the work of scientific exploration and education about the earth and its climate, how it evolved in the past, and how the future change will impact on our life."

“Most of my scientific accomplishments cited by the nominators were achieved during my past 20 years at Bryant, along with many Bryant colleagues, students, and alumni to whom I owe my thanks and appreciation. Being a Fellow of the Geological Society and working with so many other scientists who are also passionate about this important work is incredibly meaningful and rewarding.”

Professor Yang has been a member of the Bryant community since 1998. Recognized as a U.S.-China Public Intellectual Fellow by the National Committee on U.S.-China Relations, he is the founding director of Bryant University’s U.S.-China Institute and the inaugural Vice President for International Affairs. Yang established the University's Environmental Studies in China program in his first year at Bryant.

He has held visiting appointments at Brown University and at Yale, and is an honorary professor at the Chinese Academy of Sciences and three Chinese universities. You can read more about Professor Yang's achievements here.